Gardens really are works of art. The gardener takes into account color, texture, shape, line, and composition when designing the garden the same way an painter does when outlining their work. Each seed that is planted is carefully chosen to bring the gardener’s vision to life. Every flower, shrub, and tree is an artistic expression of the planter’s personality. Similarly, a painter’s brush strokes are chosen with intention to capture the beauty that lies within their mind, and perhaps the painter’s garden.

Gardens became particularly influential on artists around the 19th century, when personal home gardens within a fairly urban environment became popular and accessible for those in the middle class. Before this, gardens were strictly agricultural or aristocratic. Suddenly, average people had the ability to design and tend their own gardens for pleasure and aesthetic value—not just for growing food.

Many painters cultivated beautiful gardens specifically to give them a pleasing natural subject to paint. Gardens were especially popular with the Impressionists, whose vivid color sense, broad brush strokes, and appreciation of nature paired perfectly with the garden as subject. 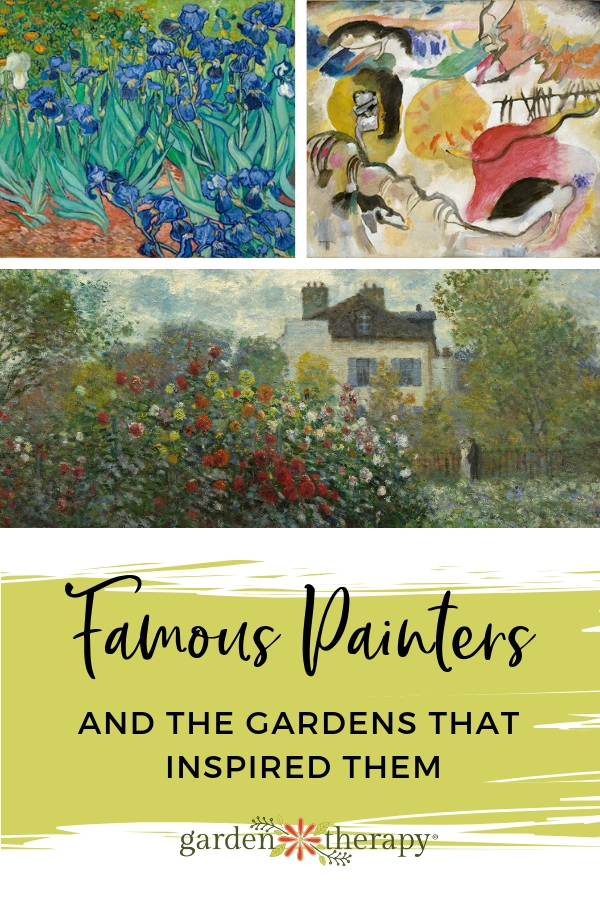 Monet once said “I perhaps owe having become a painter to flowers.” This is certainly visible in his work, much of which depicts great swaths of colorful blooms. For the final 20 years of his life, the main subject Monet painted was his garden. He planted the garden with irises and chrysanthemums, exotic flowers that were newly introduced to Europe at the time, so that he could paint these colorful beauties from life.

Monet’s water garden, which provided the muse for his famous water lily paintings, not only inspired art but was inspired by art itself. The water garden is designed in a Japanese style. Japanese aesthetics were extremely popular at this time because of an art movement known as Japonism—traditional Japanese art prints—which had recently made its way to Europe. The popularity of Japonism meant that Japanese design of all sorts was getting more recognition in Europe, which is reflected in Monet’s water garden.

Although Van Gogh wasn’t an avid gardener himself, the gardens he spent time in obviously meant a lot to him and inspired his work. Van Gogh greatly admired the painter Charles-François Daubigny, and after Daubigny died Van Gogh traveled to the artist’s home and spent his time painting Daubigny’s expansive garden. The garden is depicted in many of Van Gogh’s works.

Van Gogh also spent a lot of time in the gardens of Saint Paul Hospital when he was confined to the grounds due to illness. Many of his most famous paintings are of this garden, and it is clear that it had a great impact on him. Van Gogh found some solace in the gardens while struggling with severe mental illness, and you can see the peace and comforted the gardens provided him by looking at his depictions of them.

Although Kandinsky wasn’t one for painting literal gardens, hid garden is known to have been a great inspiration to him and one of his favorite hobbies. The bright colors of the garden can be found in his work, and floral forms verging on abstraction appear in some of his paintings.

The garden was very important to him – a series of letters between him and his wife while she was away one summer finds them mostly discussing the progress of the garden including how the lettuce is doing and what Kandinsky has been planting. In fact, the letter focus much more on gardening than on painting!

Dali was inspired by Orsini’s famous gardens at Barmazo, particularly the statues of various monsters, which influenced the creatures he painted in The Temptation of Anthony. The sculptures of grotesque animals and monsters covered in moss and tucked behind greenery are extremely surreal, and it is no surprise that the gardens resonated with Dali’s own artistic sense.

Dali also designed his own garden, which you can still visit today. The garden spreads across his grounds and is dotted with surreal sculptures intermingled with trees and shrubs, not unlike the gardens at Barmazo that inspired him so much.

Many of Kahlo’s paintings contain natural elements such as flowers, vines, and wildlife. She iconically wore flowers in her hair (which she grew herself). Her library contained lots of books on botany and herbalism. She and her husband, painter Diego Rivera, kept a well-tended garden at their house in Mexico City. For Kahlo, plants were a major part of life.

Kahlo planted her garden with morning glories, native plants, fruit trees, and cacti. The garden is an eclectic collection of plants, sculptures, colorful pots, and rockwork, with an Aztec-style colorful pyramid as the focal point. The entire garden is a tribute to Mexican Indigenous culture and a celebration of vivid color.

Not long before she died, when she was very ill and bedridden, Kahlo had her bed moved into the hallway so that she could look out of the door into her garden. Its importance to her must have been great if the garden was the thing she wished to see most at the end of her days.

Searching for Treasures from Local Artists

Beyond the great artists, there are many more painters to be found right in your own backyard. Does your city or town put on an art and garden tour? There are usually many treasures to be found by touring an painter’s garden, especially if they are local.

We use cookies to ensure that we give you the best experience on our website. If you continue to use this site we will assume that you are happy with that.OK