We have a lot to thank plants for, but the air we breathe may be top of the list. Plants take in all our carbon dioxide and make plenty of oxygen in return. But do plants need oxygen too? Today, I’m talking about the part of respiration that goes unnoticed— how plants actually use oxygen!

We all know that we owe plants for all our oxygen and fresh air. Plants take in carbon dioxide and release oxygen. It’s essential for the survival of the human race and all our critter friends.

But plants actually need oxygen too. To understand why, we need to understand the process of photosynthesis.

During photosynthesis, plants convert carbon dioxide from the air and water from the ground into oxygen and sugars (glucose). They use the energy from sunlight to do this. The sugar is used by the plant as food and while the oxygen is a by-product.

For this process, they do need some oxygen as well.

The difference is plants don’t require nearly as much oxygen as we do and are happy to pass along their oxygen scraps to the rest of the world.

Why Do Plants Need Oxygen?

During the day, plants will hold onto some of the oxygen they produce during photosynthesis to use during cellular respiration when they’re making and using their sugars. Therefore, plants don’t need extra oxygen during the day.

But when the sun goes down, their source of energy for sugar-making disappears.

Plants still need oxygen at night when there is no sunlight, and they can’t use photosynthesis to produce their sugars. Like us, they need to keep up their metabolism even when the sun goes down.

To do their late-night snacking, they go into their sugar reserves from when they had sunlight, and doing so uses oxygen.

So at night, they absorb oxygen from the air and emit carbon dioxide. It sounds a lot like us, doesn’t it? Luckily, plants produce ten times more oxygen during the day than they use during the night.

Do Plants Need Oxygen to Survive?

While they don’t need much oxygen, plants require it to survive. They’re continually using a small amount of oxygen; sometimes, they need more oxygen than they’re generating (during respiration at night). In these cases, they need to take oxygen from the air.

What Happens to Plants Without Oxygen?

With zero oxygen, a plant will die. However, even a lack of oxygen in the air can make a difference. Indoor plants that don’t get much airflow can sit in stagnant air.

Without any airflow, “toxic” gases can build up. This can result in damaged or decaying leaves and a generally sick plant. I would say this is pretty rare, as plants tend to be in rooms with windows and generally enough airflow.

Dust and debris can also decrease gas exchange on leaves. This can affect a plant’s ability to absorb oxygen and carbon dioxide when needed, harming it. So dust your plant!

Looking to bust another plant myth? Houseplants are often touted as amazing biofilters to help remove and filter toxins from the air. But can houseplants really purify the air? The answer may surprise you! 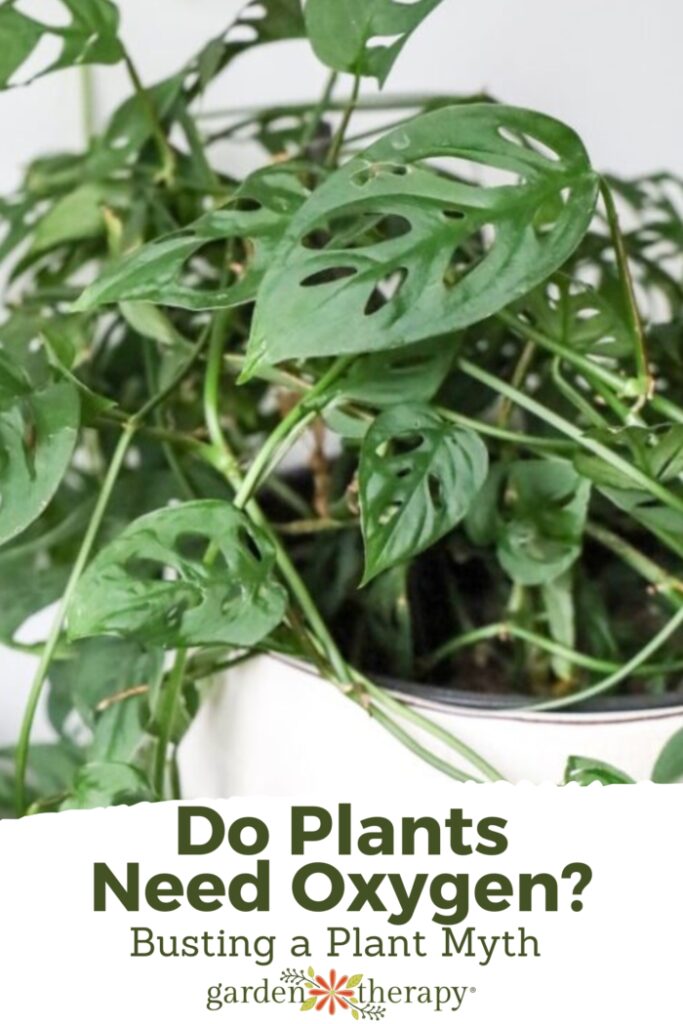