It’s a shame that you can’t smell these cinnamon dough ornaments through your screen because the aroma is amazing: tummy-warming sweet spiced apples. It wafts throughout the house as you make them and will continue to scent the Christmas tree for years to come.

I love this recipe so much more than the traditional salt dough ornaments. They appear so much more rustic to me, especially with the leaf imprints. Plus, salt dough lacks the key part of what makes these ornaments so amazing…the cinnamon smell!

If you are looking for a Christmas ornament crafting project this year, you won’t be disappointed. Designed to resemble gingerbread, this cinnamon dough ornament recipe only requires three ingredients.

Since they are made of only non-perishable ingredients, they will last for many Christmases. But don’t be fooled by the smell! This cinnamon dough is not edible as this recipe includes glue to help hold them together.

Since you won’t be eating this dough, don’t waste your money on expensive spices. Besides cinnamon, you can also use allspice, nutmeg, and pumpkin pie spice if those scents are more up your alley!

Makes approximately 10 ornaments. See the recipe card at the end of this post for exact measurements.

Mix together the cinnamon and applesauce. Then add the glue. At first, the mixture may feel dry, but set aside the spoon and get in there and mix the dough with your hands. The more you mix and knead the cinnamon dough, the better the consistency.

Mix the dough into a smooth surface that has a light dusting of cinnamon and knead the dough until it forms a smooth ball. Roll the ball out to 1/2-inch-thick circle.

Press evergreen leaves into the dough and gently roll over them with the rolling pin to get a strong impression.

Use the mason jar to cut circle shapes out around the leaf imprints. You could also use cookie cutters to cut out different shapes.

Use a straw to make a hole in the ornament for the string.

Set the ornaments on the trays of a dehydrator for 6-10 hours. If you don’t have a dehydrator, you can dry them in the oven at 200 degrees for a few hours.

Keep an eye on them to make sure they dry and don’t bake. They can also air dry, but it will take much longer. This is a wonderful project to do before you have guests coming over because it makes the house smell Christmassy!

Thread some baker’s twine through the ornaments when they are dry, and they are ready to hang on the tree or give as gifts. I like to include them with the gift tag on presents for an extra, delicious-smelling touch. By the way, here are some of my other favourite eco-friendly ways to decorate gifts.

How to Store Cinnamon Dough Ornaments

When you’re ready to pack up Christmas, you can store your ornaments to use again next year. While they are fairly sturdy, they might crack and crumble if handled roughly. To store them, wrap and layer them in tissue paper and place them in a zip lock bag.

Cinnamon dough ornaments can last for years as long as you properly store them. If they begin to crack or fall apart, you can always make a new batch. Personally, I like making a batch every year just because I love the smell. It’s also a fun activity to do with the kiddo!

How To Re-Scent Cinnamon Dough Ornaments

Over time, you may find that your cinnamon dough ornaments lose their potency. If you want to refresh the scent of cinnamon, you can use cinnamon leaf or bark essential oil. Since the scent is quite strong, you don’t need a lot. With a dropper, drop 1-2 drops on the ornaments and let them sit until dry. If you want a different scent other than cinnamon, other great options include all allspice, anise, clove, ginger, juniper, peppermint, pine, wintergreen, spruce, vanilla, and frankincense. 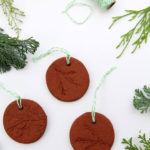 Fill up your home with the warm smell of cinnamon and apple with these festive and easy to make ornaments. Makes approximately 10 ornaments. 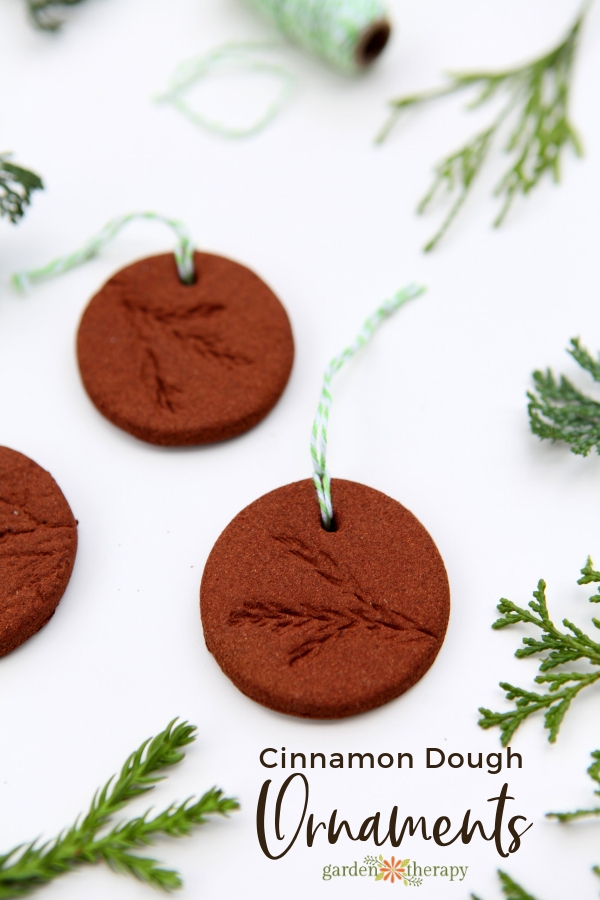