Supposedly, root beer was originally invented by Charles Hires, a pharmacist from Philidelphia who made many tonics from various roots and teas for health reasons. He made a version that was sold with the promise of purifying the blood and making cheeks rosy.

Nowadays, you can find root beer at just about any grocery store or restaurant. The more I’ve travelled, the more I see that root beer is a distinctively North American treat. We just can’t get enough of the unique, earthy drink. Since root beer has natural and garden-grown roots (ha!), it’s one of the best sweet drinks to make yourself.

If you love the drink, why not learn how to make root beer yourself? It’s not as hard as you may think.

What is Root Beer?

The primary flavour you will recognize is sassafras, but many other roots come into play to make the famous beverage, like sarsaparilla, birch, wintergreen, licorice, and burdock. Together, they create a unique earthy taste.

In terms of soda, root beer reminds me of fall days. It’s sweet, full of rooty and distinct flavours, with notes of vanilla and brown sugar.

The more commercial root beers taste more syrupy than the classic flavours. Homemade root beers will have much more kick to them, especially when incorporating all the different roots.

In learning that root beer is just a combination of different roots, I was inspired to try my own version with ingredients found in the recipes that I thought would taste good together. I’ve made it many times now, and I think it is perfect!

Root beer is a complex drink! To get such a unique flavour, you’re going to need a combination of the following ingredients:

How to Make Root Beer

Learning how to make root beer is quite simple once you have sourced all your ingredients. Then, you make make it over and over again when you get that sweet root beer craving!

Combine all ingredients except sugar and vanilla in a saucepan and bring to a simmer for 30 minutes.

Stir in the sugar and vanilla until dissolved. Simmer on the lowest heat setting for another 30 minutes until the mixture is thicker and syrupy. Strain out all the bits, then cool.

Mix 1/2 cup chilled syrup with 1 ½ cups soda water (seltzer). Ensure that both the seltzer and the syrup are chilled, as the difference in temperature causes the eruption of fizz up and over your glass. Also, add syrup to soda, not the other way around.

I found the final drink incredibly flavourful, with all the complexity you would expect from having such diverse flavours mixed together and a creamy mouth feel.

I like adding as much or as little syrup as I want and controlling the sweetness, particularly when making a root beer float (which I have now done more times than I should)!

After you make your syrup for your root beer, it needs to be refrigerated. It can sit in the fridge for up to a week before you’ll need to make a new batch.

Given the amount of sugar used in root beer, it would not be considered a healthy drink. While the actual roots of the root beer ingredients are known to have health benefits and are often used in traditional herbal medicine, the best way to get these benefits is by making herbal tea.

Sarsparilla is made from the sarsaparilla vine. Traditionally, it used to be quite bitter. Root beer is also made from sarsaparilla, but sassafras used to be the main component and flavour of the drink. However, sassafras became a banned ingredient in the USA, so the two flavour profiles merged, and the sugary version became popular. While they may have different names, they have a similar flavour profile for the most part.

Can you eat sarsaparilla?

Yes! The root of wild sarsaparilla (Aralia nudicaulis) is used to make root beer. You can also make jelly or wine from the fruit. The leaves are also edible, but the root is the most common way to eat the plant. 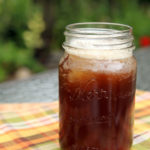 How to Make Root Beer