UPDATE: This post was created on October 21, 2018 and was updated on March 25, 2020 to include current health recommendations for sanitizing fruit and vegetables from the grocery store during the global pandemic.

It’s funny how perspectives of cleanliness can change based on relationships. As an organic gardener, I see the fruit, vegetables, and herbs that come out of my garden as the cleanest and healthiest food that has ever been. It’s similar to how I feel as a mother. I just don’t get grossed out by snot and slobber from my own kid as I can imagine other people would.

When I look at my relationship with the garden, I think about how much care and effort I put into the soil, into every seed that is grown, and into the water and fertilizers that feed it. I know that each piece of produce has been nurtured in the most healthy way possible, because I’m the one who nurtured it. With this knowledge, when I’m out in the garden and a sun-warmed tomato is just begging to be picked and eaten, I pop it into my mouth without a second thought.

That doesn’t mean that it’s not a good idea to wash fruit and vegetables you’re going to consume. 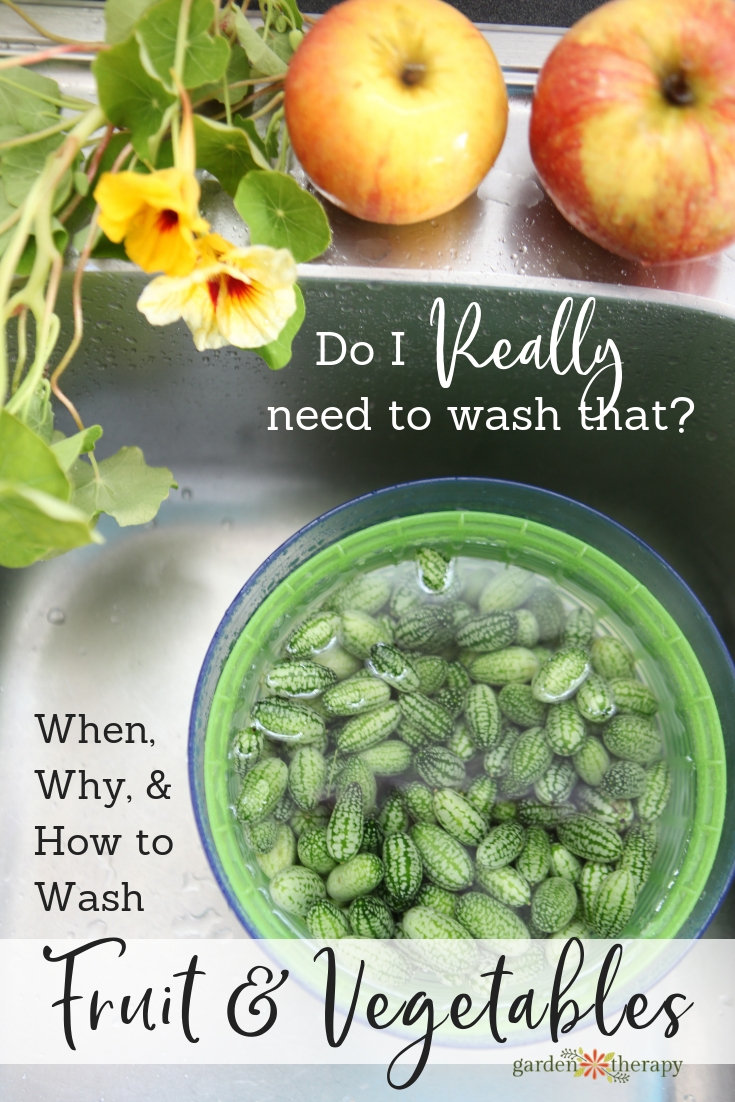 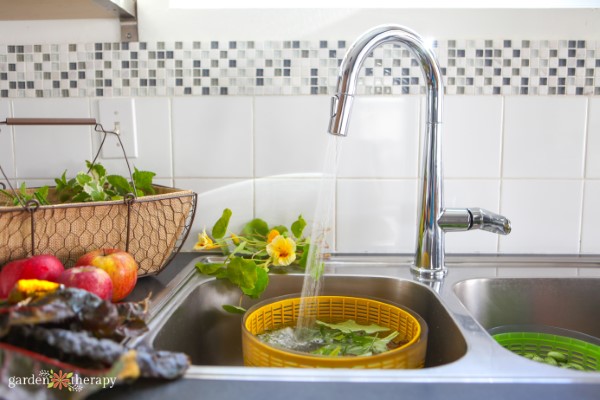 Washing Groceries During a Pandemic

Whether you are picking up groceries or getting them delivered, the rules around the world have been updated in the last few weeks for how to safely prepare your groceries for consumption. Health Canada hasn’t updated the recommendations for handling groceries at home, however; the number one recommendation is still to wash your hands for 20 seconds using soap.

More and more experts are now advising that the produce also be washed with warm, soapy water before putting it away. This is the process I have been using to sanitize my groceries: 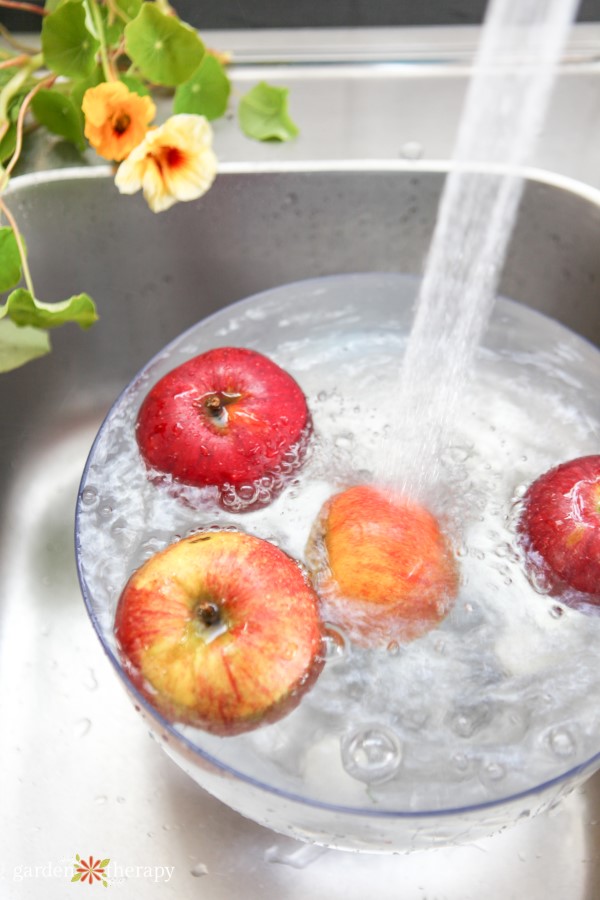 How to Wash Vegetables and Fruit from the Garden

Unless your garden is in a public space or in proximity to exposure, garden fruit and veg don’t need the full soap and water procedure.

If you’re doing a big harvest out of the garden, then it’s worth setting up some washing buckets outside before you bring your produce indoors. Set up three buckets and fill them full of drinking water. Take your freshly harvested vegetables and dunk them in the first bucket, swish them around, then pull them out, give them a shake, and pop them in the second bucket. If your vegetables weren’t very muddy or soiled, then you can remove them from the second bucket, put them in a salad spinner, and spin out the water. If they were quite muddy in the first bucket, then move them over to the third bucket for the final rinse before putting them in a salad spinner.

This is really great for salad greens and root vegetables as they should be washed immediately when harvested and then they can be stored clean and ready to eat. There are some freshly harvested fruit like blueberries, grapes, tomatoes, apples, and some vegetables like kale that I don’t like to wash before bringing them inside because I want to keep the protective bloom on their skin as long as possible. 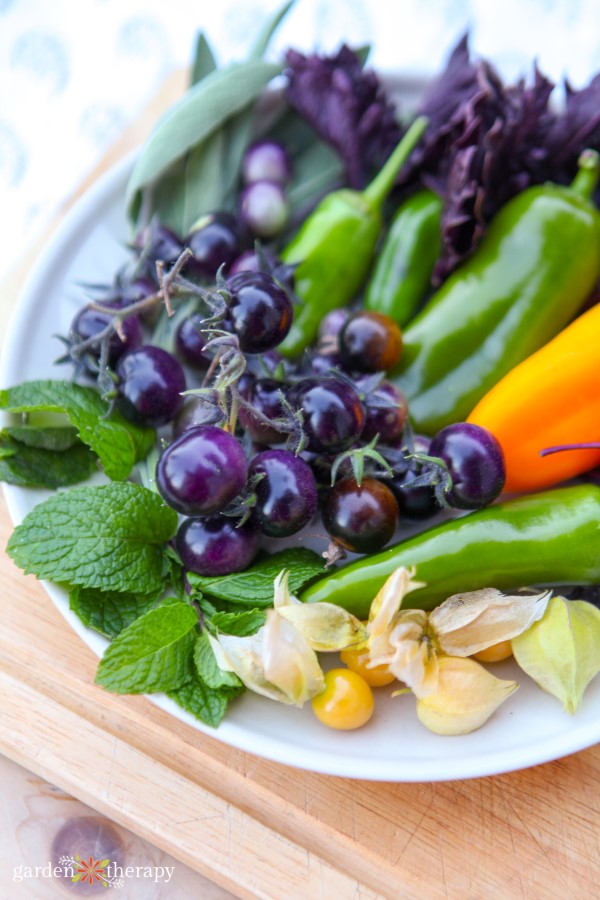 You can see bloom on the outside of blueberries as a grayish coating that comes off when you touch the blueberries with your fingers or when you wash them. You might also notice it on some of the other vegetables in your garden. The purpose of it is to help protect the fruit from insects and bacteria, so when I bring in produce that has bloom I don’t wash it until right before I’m about to eat it, allowing the produce to protect itself as long as possible and stay fresh for longer. 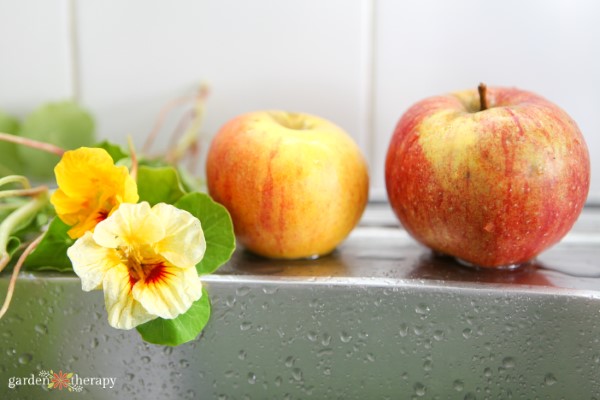 Why Wash Fruit and Vegetables from the Garden?

I feel pretty good about the soil and the water that I use in my garden. I use a drinking-water-safe hose for watering the vegetable beds and I don’t use synthetic fertilizers, pesticides, or herbicides. That being said, you never know what might be lurking in the soil or water. While I feel confident that popping some fresh berries into my mouth while gardening is not going to be the end of me, I still practice washing larger harvests.

The other reason to wash fruit and vegetables you harvest from the garden is to remove any little bits of soil, debris, and insects that might be hiding. You know the old saying that the only thing worse than finding a worm in your apple is finding half a worm? Well, the only thing worse than finding a caterpillar in your salad is finding half a caterpillar. I’m not that squeamish about bugs and I know I’ve probably eaten my fair share. And, frankly, more people eat bugs in the world than don’t. But I still give my kale and lettuces a good wash and send the aphids down the drain. 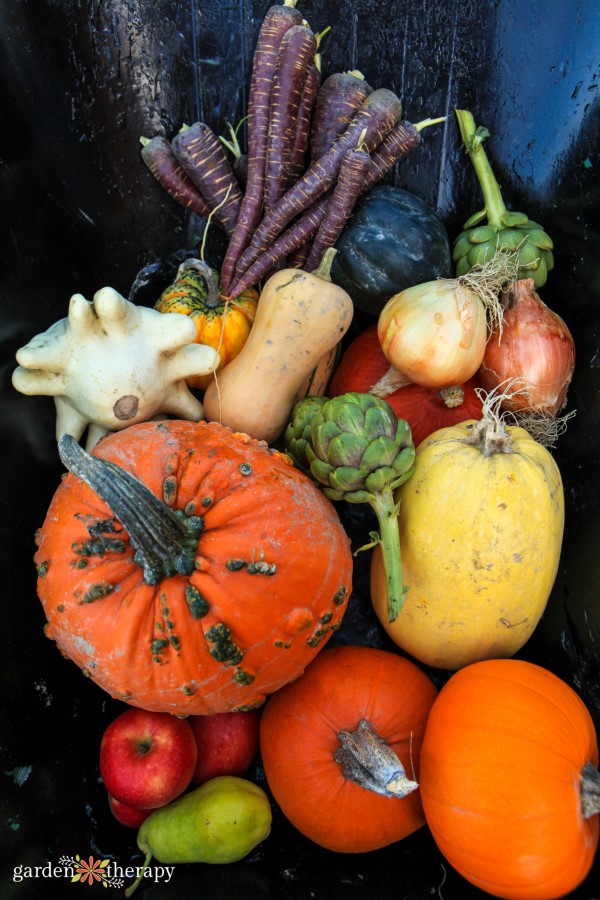 What About Organic Produce from a CSA or Market?

While you know what goes into the fruits and vegetables that you’re growing in your garden, it’s unclear exactly what is going into plants that come from other sources. Even when something is marked “organic” it doesn’t necessarily mean that the soil, water, and land where it grew will meet your expectations. Plus, after the plants are harvested, then they can be touched by many hands and be exposed to many different environments, none of which you get to be privy to. I would say that it’s just as important, if not more so, to wash purchased produce, especially considering the fact that nearly half of all foodborn illnesses come from produce. Some people use baking soda or vinegar to remove pesticides from store-bought fruit, which you can read more about here. 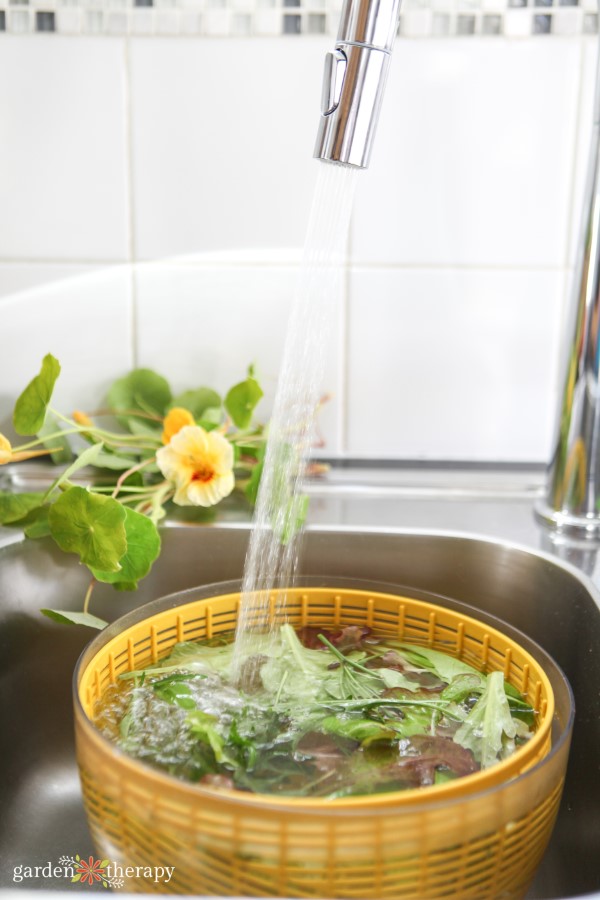 What About Boxed or Bagged Salad Mixes and Pre-Cut Vegetables?

In some cases you may purchase boxed or bagged salad mixes or pre-cut vegetables that are labeled “pre-washed.” I’m more skeptical of the cleanliness of these prepared products than I am of the whole, unpackaged vegetables. In many cases, once you cut up a vegetable it begins to decompose more rapidly than if it was left whole. And yet the shelf life of these prepared foods seems to be much longer than fresh ones I can keep in my fridge, which makes me suspicious.

I always wash pre-cut salad mixes and I’m shocked that when I wash them in the salad spinner, the water often comes out green or cloudy. When I wash freshly harvested greens from my garden there may be a few aphids floating in there, maybe even a spider, but the water is clear. I suspect that there’s some sort of fumeric acid or anti-fungal treatment added to extend shelf life and that’s not something that I want to consume. After all that pre-washing and adding chemicals, studies show that the pre-washed salads still probably need to be washed anyway, so I just skip them and go for a whole head of lettuce from the market instead. 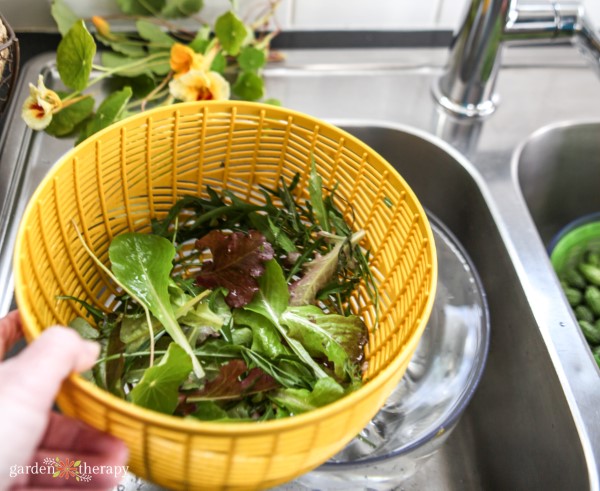 In non-pandemic times, the research says that using plain tap water to wash fruit and vegetables is effective at removing the majority of the contaminants that could be on them. When I wash sprouts I usually add a few drops of food-grade hydrogen peroxide into the water just to be extra careful. You may have heard it’s a good idea to use special produce washes to clean your produce, but studies have shown that produce wash doesn’t clean fruits and veggies any better than regular old tap water. If you’re washing produce from the garden and want to get rid of contaminants like dirt and other debris, tap water is the way to go. 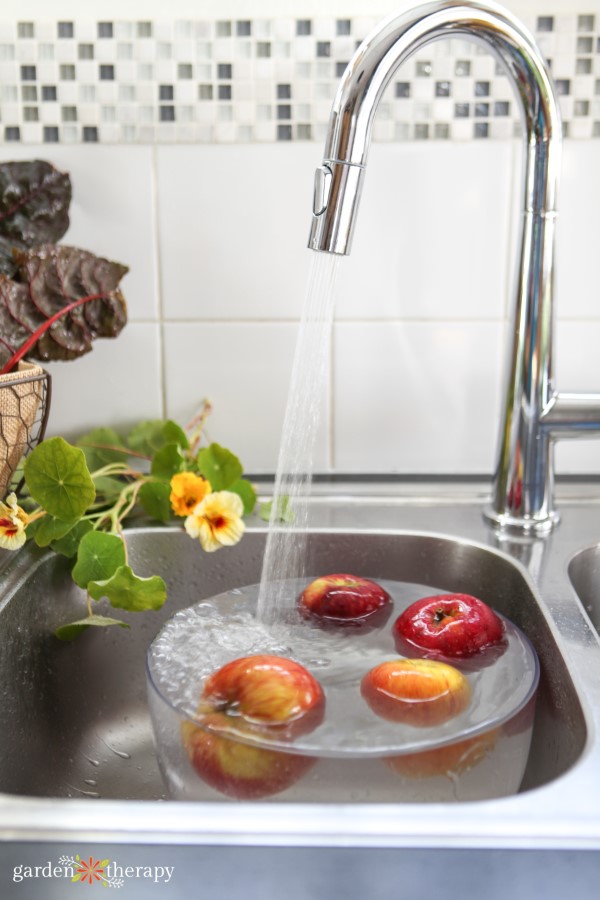 Can I Eat Bruised, Past-its-Prime Produce?

I don’t believe that things from the garden have to be perfect, but it’s also important to use your common sense and not eat things that are spoiled. It may be tempting to salvage a crop if you’ve grown gorgeous produce and all of a sudden, just before harvest, it got munched by a critter or attacked by a fungus. Use your judgement to see if cutting off the affected portion leaves you with something that is still edible, but remember that even if it’s edible that doesn’t necessarily mean you should eat it. 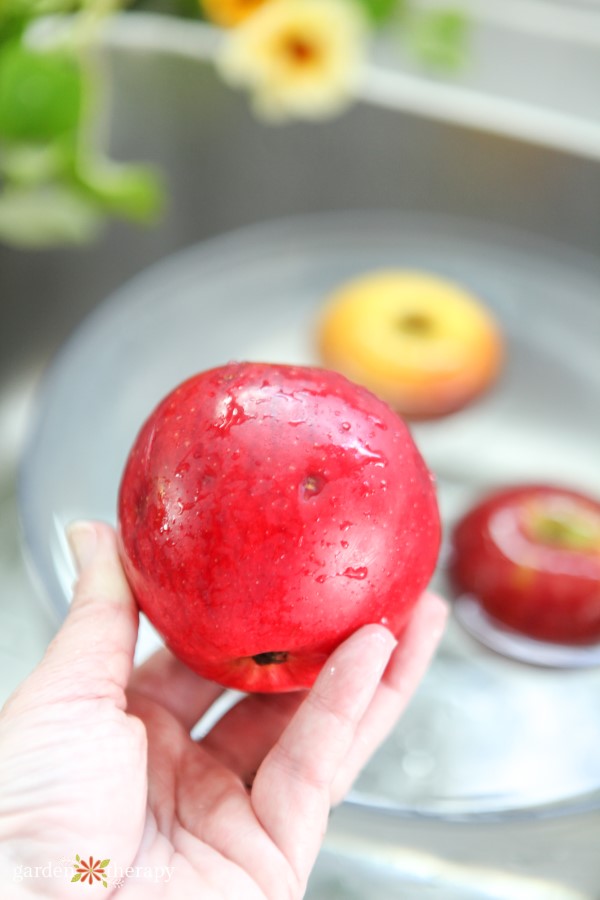 If you cut off the undesirable section and what you have left is a piece of nice, tasty produce, go ahead and eat it, but keep in mind that often when a fruit or vegetable has succumbed to damage or disease, its flavor has also been affected (see more on that here). There’s an Ayurvedic principle that states you should not eat anything unless it’s delicious. I try to live by this. If the food is no longer fresh and delicious, then it probably isn’t going to serve me to eat it. It will, however, make excellent compost. 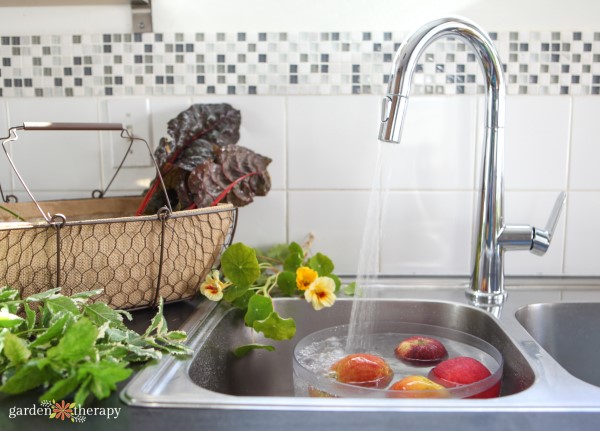 Can I Wash Off Bugs and Still Eat My Vegetables?

What about bugs? Wormy apples, aphiddy kale, and leaf-mined lettuce sure aren’t pretty but they also aren’t the end of your harvest. Insects on garden-grown vegetables are a certainty, but eating them is not so black and white. It depends more on how much you can stomach. In most cases the insects won’t hurt you to eat them, despite the fact that they might be somewhat unappetizing.

Probably the worst thing they’re going to do is suck all the delicious flavor out of your food, leaving it less tasty than it would have been had it not been shared with some six legged friends. In most cases I’ll just wash off any bug damage and remove any discoloration or unappetizing looking parts. The insects should come right off in the wash and the rest is just fine to eat. 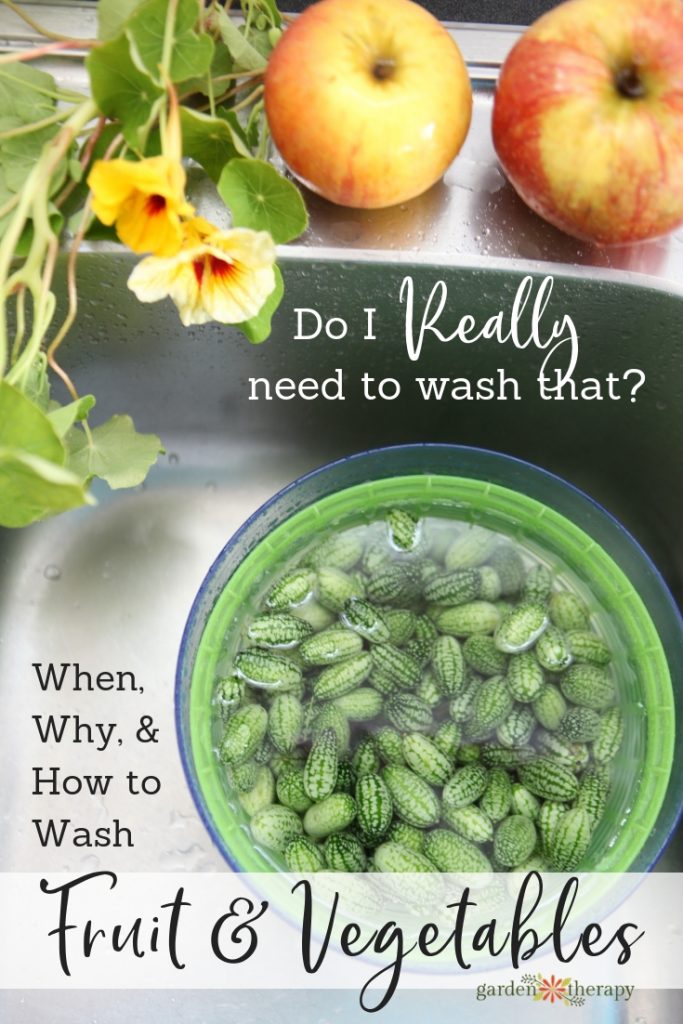