Growing oregano gives you access to an herb there are countless uses for. This herb is easy to grow and offers a bounty of health benefits that every gardener can take advantage of. Here’s everything you need to know about how to grow and use oregano! 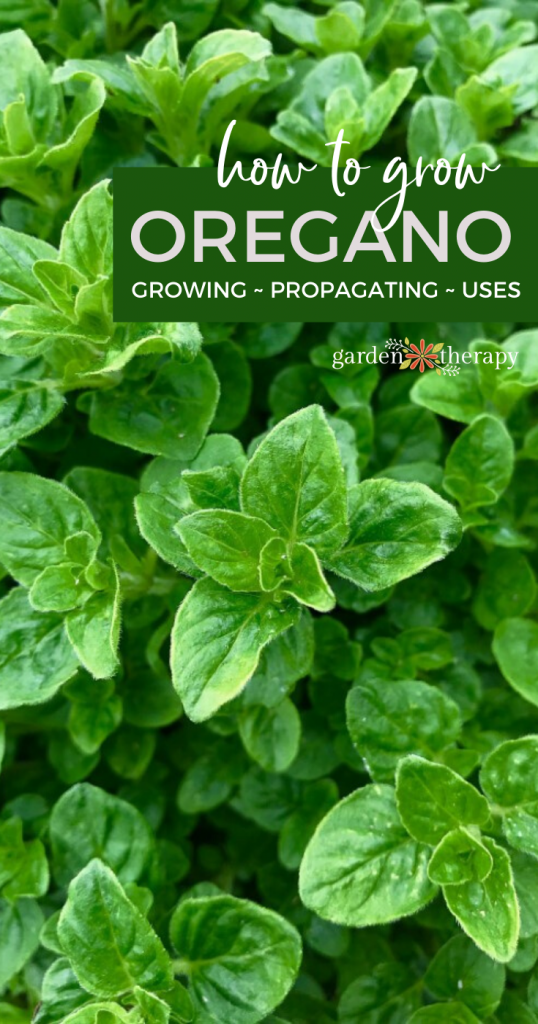 Oregano is a well-known culinary herb used in Italian, Turkish, Greek, and Mexican cooking. It has a rich, warming flavor, but can have a bitter taste, especially when used fresh.

It’s both easy and attractive to grow in the garden, and it has wonderful medicinal properties as well. This guide will cover growing oregano, the history and health benefits of it, how to harvest it, and how to use oregano in recipes.

This article was reviewed by herbalist Lori Snyder. This is not to be used as personal medical advice; always consult your health care professional for individual concerns.

Here is what Lori had to say:

We know that this strong-smelling Mediterranean herb has many healing properties. Did you know that it’s loaded with antioxidants? An excellent source of fiber, vitamin K (good for the blood), manganese, iron, vitamin E, and calcium! Food is our medicine.

Oregano (Origanum vulgare) is native to the Mediterranean and Eurasia regions and tends to grow wild in mountainous areas with rocky soil. Oregano was known to be used by the ancient Greeks. Some records of herbal use of oregano date back as far as 1600-1200 BC.

The word oregano is said to have originated from the Greek word oreos, meaning “mountains,” and ganeos, meaning “brightness,” “joy,” or “beauty.” 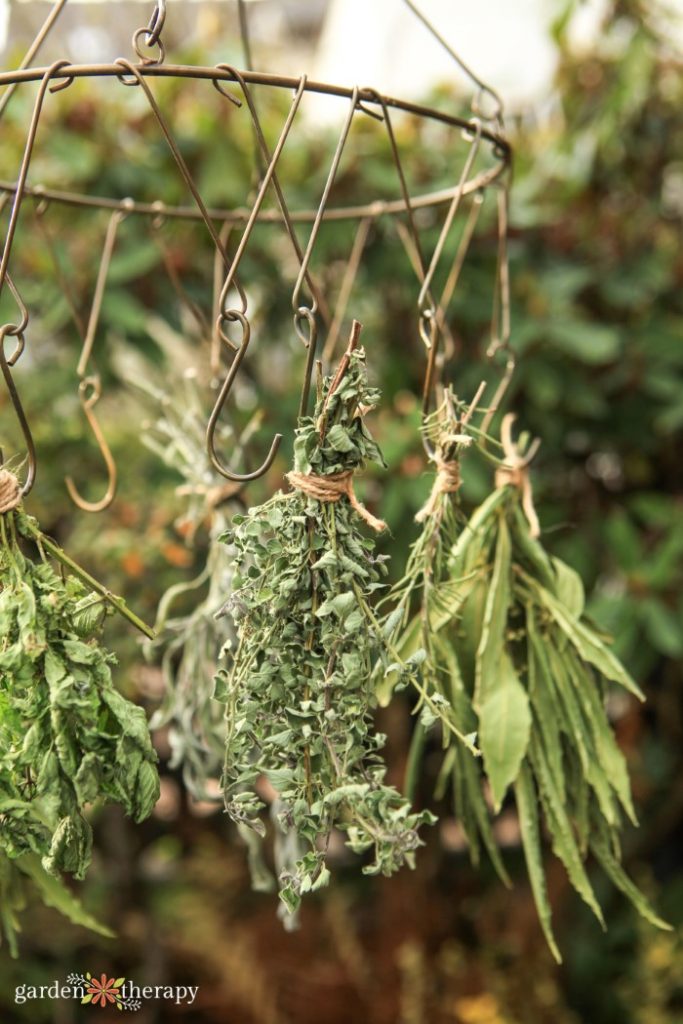 Oregano used to be a single species but has now cultivated around the world into several different varieties. This pungent herb has been cultivated over the last 3,000 years in Egypt.  The use of oregano as a disinfectant and preservative was common in Egypt. It was often combined with rosemary and lavender in linen sachets and bath products. It was commonly used for fragrance, cleansing, and hygiene.

In ancient times, oregano was often referred to by the physician Galen and well-known herbalists Culpeper, Parkinson, and Gerard. The Origanum species, including marjoram, were recorded for use of a variety of ailments including colds, toothaches, stomachaches, bruises, swellings, earaches, and coughing.

Oregano in the Bible 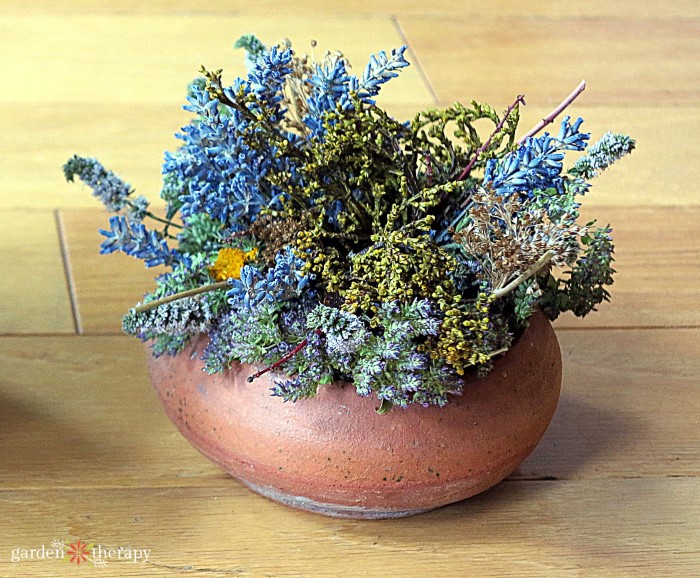 Lebanese oregano is considered by authorities on the Bible to be one of the plants referenced as ‘hyssop’. Legend has it that it was the plant used to sprinkle lamb’s blood on doorposts during Passover. It has been used in purification and sacrificial offerings as well.

According to some magical folklore, oregano was associated with the spirits and thought to help the dead sleep peacefully. Oregano was also used in sachets to help attract wealth.

In the 7th century B.C., oregano was used to flavor meat, vegetables, and wine. It is still used extensively today in kitchens around the globe.

While oregano is most commonly known as a culinary herb in modern times, it contains powerful antimicrobial and antibacterial properties. Studies on oregano essential oil show antibacterial activity, even against E.coli.

The main active constituents in oregano are carvacrol and thymol, which have broad-spectrum antibacterial action also against Salmonella typhinium and E. coli, as well as different kinds of MRSA, an antibiotic-resistant bacteria.

In one study, dietary use of oregano leaf reduced oxidative stress in rats, demonstrating its powerful antioxidant properties as well. Both carvacrol and rosmarinic acid have been reported to protect DNA from damaging agents.

How to Grow Oregano 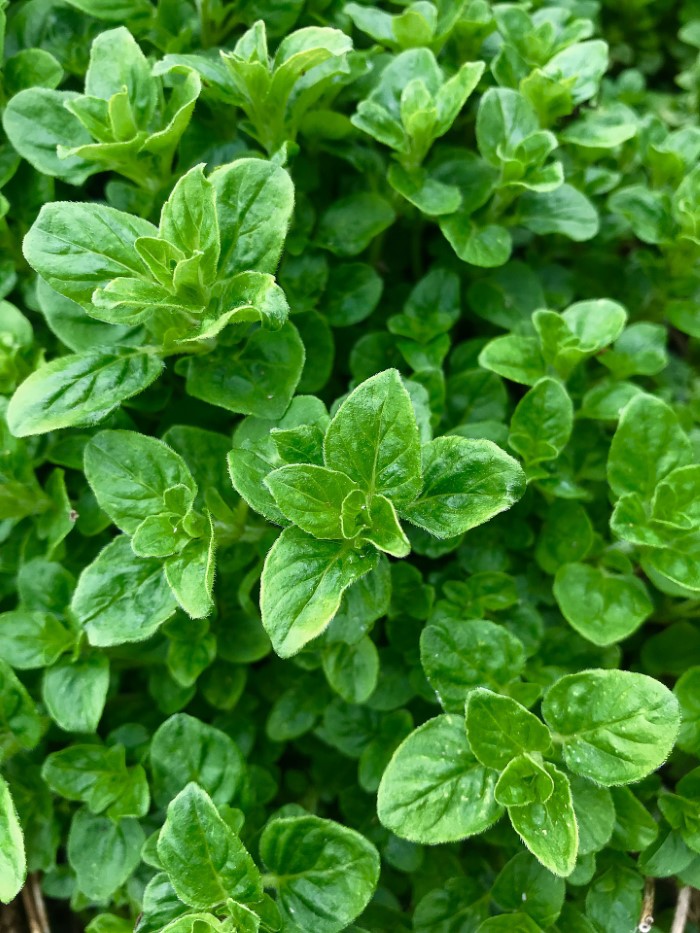 Now that you know all the incredible benefits of this herb, let’s talk about growing oregano.

Oregano, sometimes called wild marjoram, belongs to the mint family so it’s both easy to grow and prolific. It’s a woody-stemmed perennial that lasts well overwinter in zones 5-10. In Zones 4 and below it can be grown as tender perennial or annual and protected over winter. 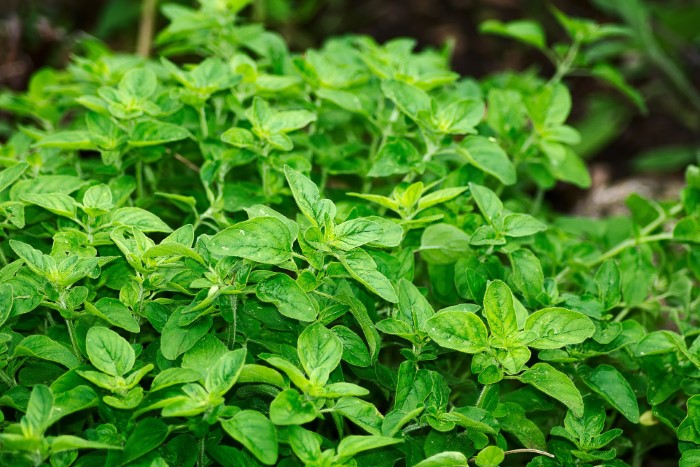 It not only is suitable for growing in containers, but it can also be preferred to keep the spread contained. On the other hand, oregano does make a fragrant, attractive, low-growing groundcover plant in garden beds, which is how I grow it.

How to Propagate Oregano

Oregano can easily be started from seeds and cuttings from an existing plant, but it’s easiest to divide a clump from an established plant as a new start.

You can dig a clump out with a soil knife, and it will easily transplant into its new home. Or dig up the entire oregano plant and divide it into many more plants.

If growing from seeds or cuttings, do so indoors 6 to 10 weeks before the last day of frost in your area to get a head start on the season.

Let the plants grow to about 4 inches and then encourage a denser, bushier plant by harvesting the leaves for use! You can harvest them by pinching off the tops or pruning them lightly. Regular pruning will cause the plant to branch again into tall, spindly plants.

Like all Mediterranean herbs like lavender and rosemary, oregano loves sun and heat. The plants are drought-tolerant and require excellent draining soil. Once established, they require little water.

How to Harvest Oregano

Harvest oregano liberally before flowering for drying and use throughout the year. The leaves have the most flavor right before the flowers bloom. I recommend you harvest in the morning after the dew has dried as the leaves will contain the most volatile oils. The natural essential oils are highest in the morning in most herbs. 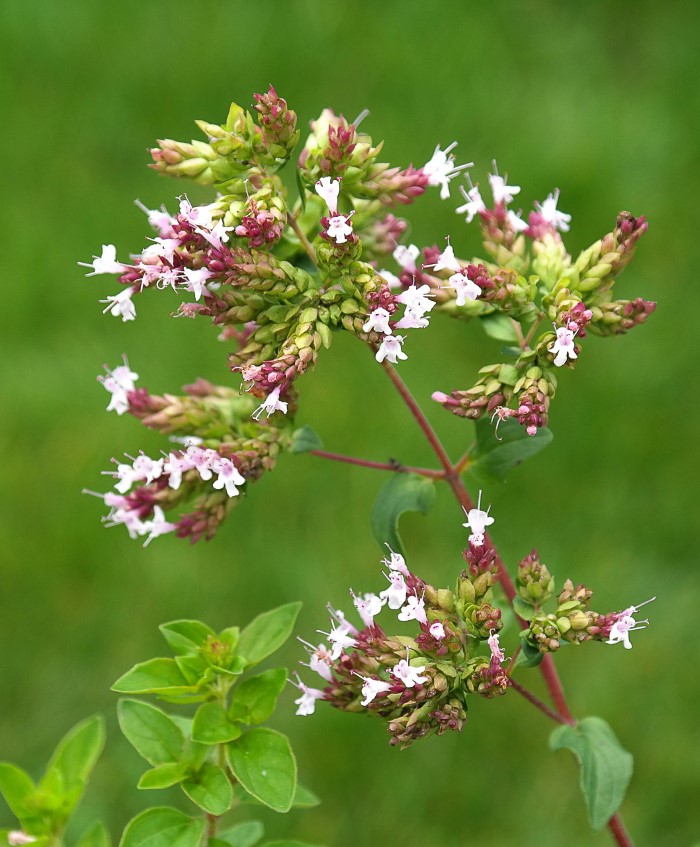 Note: Oregano flowers are not only beautiful; they are highly beneficial for pollinators as well. Leave some for the bees and allow them to dry on the plant. You can then cut the flowers stems back in fall and use them for indoor dried flower arrangements.

Use clean scissors or snips to remove stems from the plant. Cut back just above the set of leaves. This will allow the plant to branch from the cut area and produce more stems. If there is any dust or mulch, rinse them lightly and use a salad spinner to remove the excess moisture. 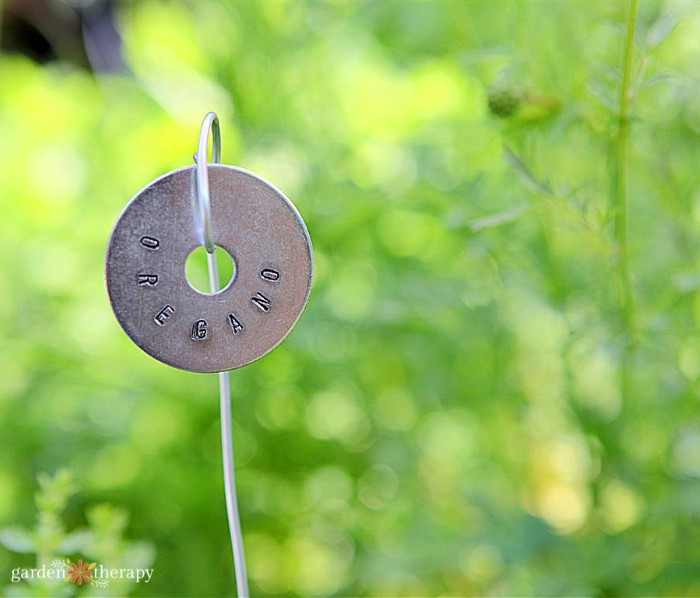 How to Dry & Store Oregano

Hang a bundle of stems and leaves upside down on a cool, dry, location, out of direct sunlight. When dry, you can remove the leaves by running your fingers from the top to the bottom of the stems dislodging the leaves into a bowl below. The leaves will come off easily. Sift through the leaves to remove any bits of stem or chaff. 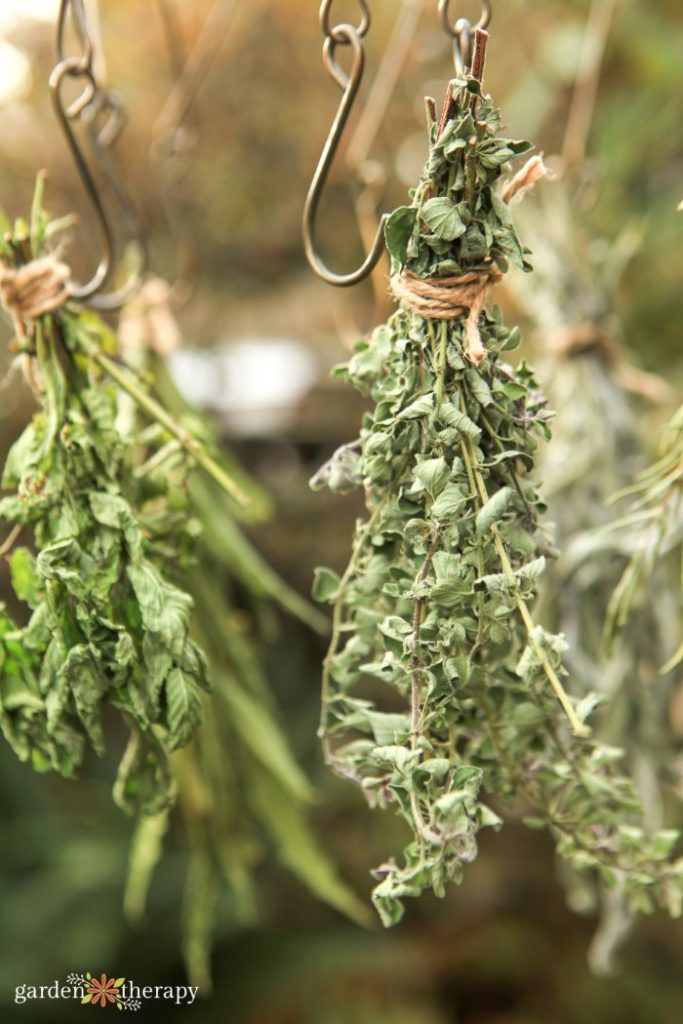 If you prefer to dry the leaves individually, remove leaves from the stem and dry separately on parchment paper on a tray. Spread the clean leaves across the tray and allow them to dry thoroughly. 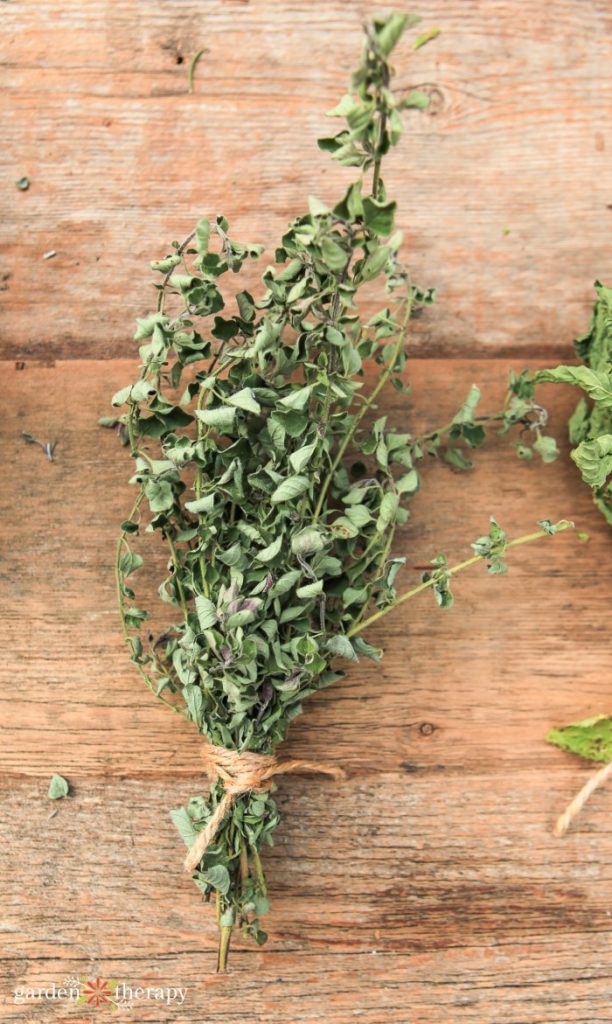 Store in an airtight, clean, dry container for up to 6 months, or when the new fresh oregano is ready to be picked in your garden.

Oregano is a staple herb for the kitchen and remedy cabinet and a great addition to your garden. Grow your own oregano at home and find all kinds of great ways to reap the benefits of this amazing herb!