Few flowers have figured out subtle beauty like borage. It may not be the first flower that comes to mind when people think of brilliant summer flowers, but once it is here, you can’t help but admire the uniquely star-like blue flowers. Beyond its beauty, borage has been an herbal favourite for centuries. Grow this beauty in your garden so you can discover all the benefits borage has to offer.

I’m so excited to talk about one of my favourite blue flowers, borage! Borago officinalis is an annual plant full of star-shaped blue flowers.

It’s hard to ignore the beauty of this garden ornamental. Every year, I grow borage so that the bees can enjoy the flowers alongside me. It’s a must-have for the bee garden.

There’s a lot people don’t know about the plant. More than a unique true blue flower, it has quite a few medicinal benefits and uses in the garden. So, if you have borage on the brain, take a deep dive into this fun flower with me!

This article was reviewed by herbalist Lori Snyder. This is not to be used as personal medical advice; always consult your health care professional for individual concerns.

Here is what Lori had to say:

Not so commonly found even in some of my old herbal books, it feels like it’s time to resurrect this electric cobalt blue shooting star flower! Borage comes from the Latin word borra for a hairy garment. Both the leaf and flower are edible with a cucumber-like taste. It’s best to cook it like spinach to avoid her hairy texture.

This is a great favourite for bees as the blooms pump out nectar and with her handing flower heads. The rain can not dilute her sweetness. Use a fresh infusion for an eyewash or as a compress for headaches. This is a classic medicinal old-world herb and a gift ourselves as we book time for radical rest.

Drink a mixture of mugwort, parsley, rue, bamboo, yarrow and borage in any combination to power up the pineal gland or as mentioned in folk history to open the 3rd eye! Internally, borage oil strengthens our adrenal glands weakened by steroids, stress, mental exhaustion, and depression.

Borage is an annual herb native to southern Spain and Morocco. Also known as starflower, many people will recognize the plant for its blue star-shaped flowers. The flowers have brown anthers and turn pink after pollination.

Part of the same family as comfrey, some mix up the foliage of the two plants before it blooms. The plant grows in loose clusters with pointed, oval-shaped leaves. You’ll find white, prickly hairs along with the leaves and stems. The plant grows 1 to 2 ½ ft tall.

Now, the plant has naturalized throughout most of Europe, Northern Africa, and South and North America. You’ll find it a favourite for many gardeners!

The History of Borage

Borage is a herb long loved by Celtic people who saw it as a magical plant. They drank the leaves in wine to give them adrenaline, often added to the stirring cups of crusaders before they went on journeys.

16th-century herbalist, John Gerard, attributed borage as the herb of courage, citing “Borage, bring always courage,” and “a syrup made of the flowers of borage comforteth the heart, purgeth melancholy and quieteth the phreneticke or leunaticke person.”

Celtic people would also give the herb to prospective husbands before they popped the question. A whole new kind of liquid courage!

In medieval times, borage was also embroidered on king and jousters mantles to help bring them courage. Some say the name comes from the Celtic word borracha which translates to a person with courage or bravery while others say it derives from the Latin word borra meaning rough hairs.

Let’s explore some of the many impressive health benefits this blue beauty can offer.

Most people don’t think about the heath of their adrenal gland, but you really should! The adrenal cortex produces many key components of the body: sex hormones such as androgens and estrogen, salt in the blood (aldosterone), and sugar balance (cortisol).

More now than ever, this gland experiences a lot of stress. The aerials parts of the borage plant can be used as an adrenal restorative for stress, anxiety, insomnia, and other nervous system symptoms.

Doctors have also used the herb after medical treatments to revive the glands after using cortisone or steroids.

You may know borage oil by its flashier name, starflower oil. Made from the seeds of borage, it’s very rich in polyunsaturated fats. It’s known as the richest plant source for gamma-linolenic acid (GLA). And what on earth is that? It’s a fatty substance used for skin conditions like psoriasis and eczema.

People use borage oil is used topically to treat rheumatic pain and skin conditions. The GLA in the plant is known to help with inflation issues in conditions like rheumatoid arthritis. Borage oil can also help treat premenstrual issues.

Many people don’t use borage for its anti-inflammatory properties, but studies show that people should start considering it. As mentioned above, it can help calm sore and inflamed skin when used topically. When ingested, it can help soothe stomach inflammation that occurs from allergies, toxicity, and infections.

The history of this plant has proven true. Just like how people in medieval times used it to inspire courage before war, ingesting borage can give you a feeling similar to an adrenaline boost. The body will harden like it’s putting on a coat of armour and you will itch to get moving.

Interestingly enough, the plant has been noted to help people set boundaries. If you always feel the need to say yes to things, borage may give you the courage needed to say no.

Besides medicine, there are a few more uses for growing the borage plant in your garden.

Borage is one of the most popular companion plants. By intermixing herbs alongside your vegetable garden, you can prevent pests from eating your precious veggies 100% naturally.

Borage is best known for helping out tomatoes. Planted next to them, it deters hornworms from eating up your crop. Besides hornworms, it also deters cabbage worms and asparagus beetles thanks to its prickly hairs. Plant your borage next to tomatoes, squash, and strawberries to get both a beautiful ornamental and a pest hero.

You can also use borage as an ingredient for your own pest deterrent spray. When combined with other plants pests hate, you can spray throughout all areas of your garden.

Yes, you can eat borage flowers! To this day, many European countries use borage for traditional dishes. In Germany, you’ll find it as a core ingredient in the famous Frankfurt green sauce. The Italian region of Liguria uses it to stuff their ravioli pasta. And in Spanish regions, you’ll find the plant boiled, sautéed with garlic, then served with potatoes.

I like to use the borage flowers as a garnish thanks to their bright, star-shaped flowers. It looks amazing on a salad or in summer cocktails. The taste is sweet and mild, a combination of honey and cucumber. The stems smell just like cucumber too!

How to Grow Borage

Borage is very rarely found in garden centres or nurseries, so you’ll have to start your plant from seed. Luckily, they’re not difficult plants to grow, thriving in zones 2-11. Directly sow the seeds in the ground after the threat of frost or start them indoors before hardening them off and transplanting them outside.

Add some compost and mix it into your soil before planting. Borage can tolerate just about any soil as long as it has good drainage. Sow the seeds ¼ to ½ inch deep.

Once they’ve reached 6-8 inches tall, thin out the seedlings. While they’re starting out, give them frequent waterings. Let the plant dry out between waterings once established.

Borage tolerates full to partial shade needing at least four hours of direct sun. Full sun will get you the most blooms and sturdy stems.

The leaves, flower, and stem of the borage plant can all be harvested and used. The plant reaches maturity around eight weeks after planting. Once done blooming, it will deteriorate quite quickly. You’ll want to harvest when the plant is flowering and beginning to form seeds.

To harvest, pluck the leaves by hand or with sterilized scissors. Enjoy borage fresh for eating. Otherwise, you can dry the leaves and flowers for later use.

Borage should not be ingested by those pregnant, breastfeeding, or with liver conditions. However, it can still be used externally.

The plant produces many black seeds if pollinated by bees (which it should be!). Let some of the flowers go to seed so you can collect some for the next season. Simply shake the plant and hold a container under the flowers to collect the seeds. Store in an airtight container. You can also allow the plant to self-sow if you don’t mind the placement.

What is Borage Oil?

Also known as starflower oil, borage oil is derived from the seeds of Borago officinalis. Rich in polyunsaturated fats, it helps to calm skin and reduce inflammation. It helps to treat many skin conditions such as psoriasis and eczema.

What is Borage Used For?

For health, borage can be used to restore adrenal gland health which boosts hormone and cortisol production, calm and soothe inflamed skin, reduce stress and anxiety, and provide feelings of adrenaline.

Borage is also used as an edible flower for garnishes and traditional cooking dishes. In the garden, it works as a companion plant for tomatoes, squash, and strawberries.

Borage oil is frequently used as an adrenal gland restorative, the part of the body that produces hormones including estrogen. Thanks to the GLA content and its anti-inflammatory properties, borage can be used to help with PMS symptoms, menopause symptoms, and hormonal imbalances.

Do you grow borage? Let me know in the comments down below what you use borage for. 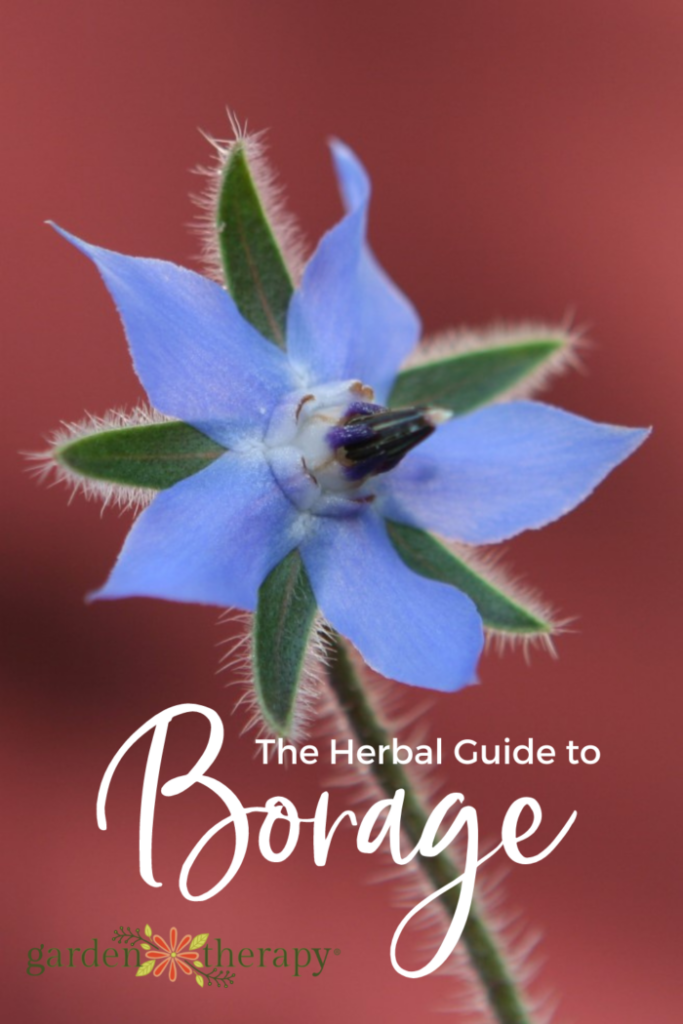