Often, budding gardeners will think they need the perfect piece of land to start growing, but that isn’t the case at all. I know this because my own vegetable garden is contained to a small, rather odd piece of land. I had to get a bit creative with how I built it. As I couldn’t move out, I had to grow it up. Here’s my unique vertical garden and tips for creating your own. You’ll never believe how much food can be grown in a small space until you see my unique raised garden bed! 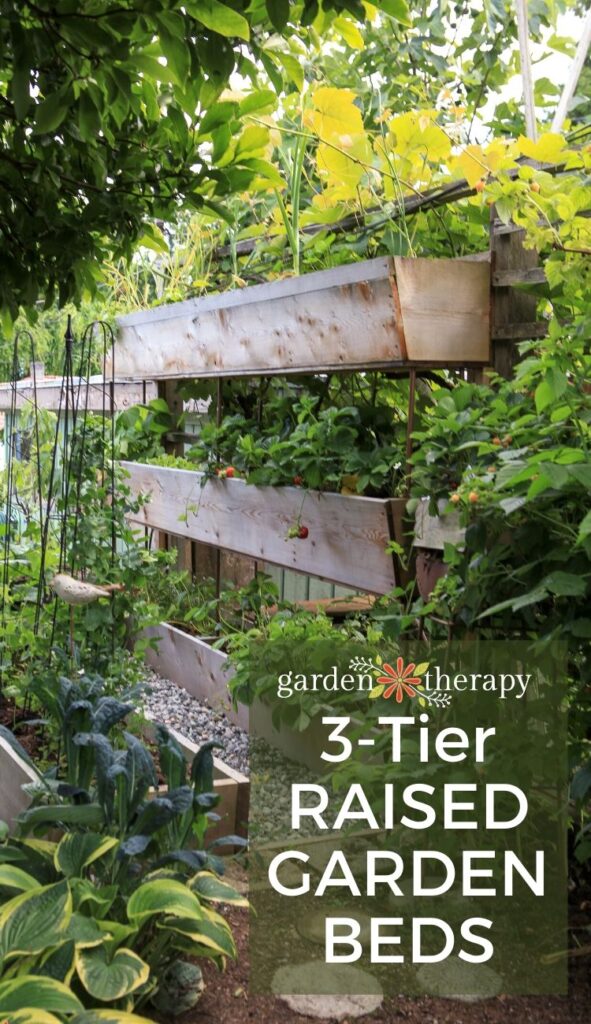 This post has been a long time in the making. It’s taken plenty of trial and error to come to this point, but I hope this information is helpful and inspiring to those of you with small spaces or uniquely shaped gardens.

For me, this raised bed planter is a unique solution that was born out of necessity. This area is an awkward small space, but now you wouldn’t believe how much food it produces! 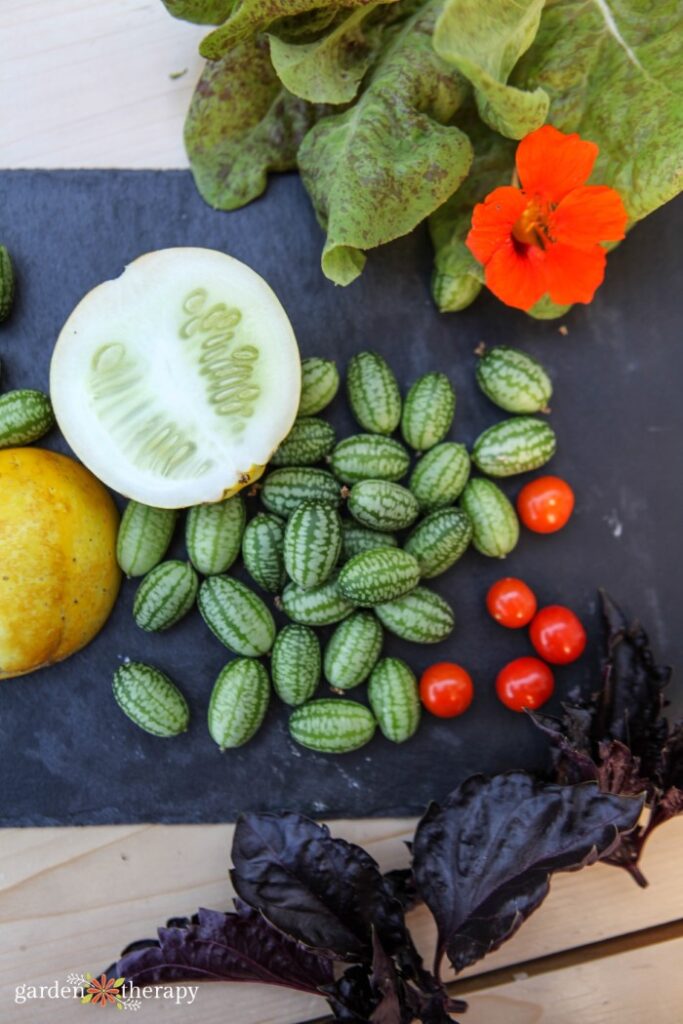 Why I Created This Unique Vertical Garden

Let me back up and explain how I got to this point with my vertical garden set up. Previously, the vegetable garden space was situated on a long strip of soil that is the only part of the garden that gets full sun. The original set up only allowed for 20 sq ft of garden space which is not nearly enough for me. Now, the garden has more than doubled that square footage by using creative vertical raised beds!

The garden in my home was designed without much thought for the sun. A south-facing backyard has always been my dream garden, and yet, with this space, it has been an ongoing challenge.

Isn’t that always the case? You finally get that dream garden and it has its own set of unique issues.

Gardening in the Sun vs the Shade 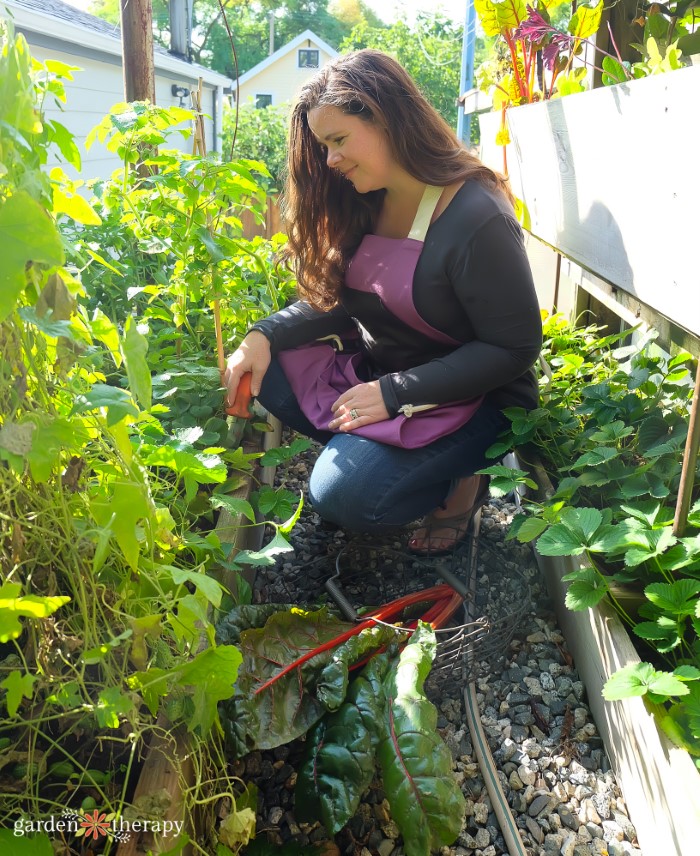 I like to have the sun on my plants and shade on my fair, freckled skin. I get pretty warm in the summer months when it gets hot, and so I’m always seeking out the shade.

When I moved into this home I quickly realized that the existing design in the garden was the opposite of that. The sunny garden beds on the south side of the property were planted with trees. They didn’t do anything to shade the lawn and the upper deck which got hot blazing sun all day long through midsummer but created deep shade in the garden. UGH.

Why I Made a Vertical Garden 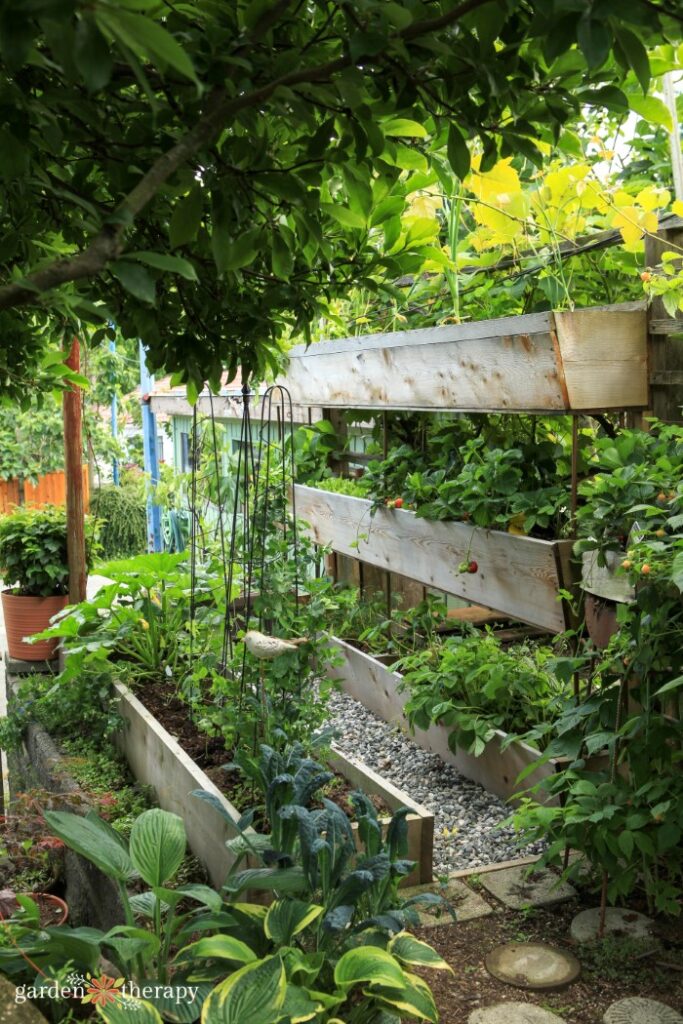 The design in my backyard had a 20 foot by 5 foot section of the garden for growing vegetables. This would have been just fine except that the area is also elevated. This particular area is raised off the ground by 5 feet. There was no fencing around the edge of the garden and the previous owners had a raised plank in the middle of the bed to reach both sides of the vegetable garden.

Imagine you’re five feet up from the ground with no fence and you’re now raised an extra 6 inches up on a platform reaching down to get it the vegetables below.

It was not only a little bit nerve-wracking to garden in the space, but it didn’t take long for my back to ache like crazy.

So I came up with a design that had two long raised beds along either side of the garden with a gravel walkway in between.

That still didn’t give enough space to plant vegetables. Each bed was 20 ft long and about 12 to 18 ft wide. In a square foot garden that means about 30-40 plants.

I couldn’t go out any further so my only choice was to grow up, turning one bed into a three-level raised bed. This gave me an extra 40 square feet of vegetable garden, essentially doubling the space.

How to Build a Vertical Garden

First off, let me preface by saying building a three-tier raise bad that’s 20 ft long is not an easy task. I’ll admit it was not cheap either. However, the cost and effort were more than worth it for the finished product. 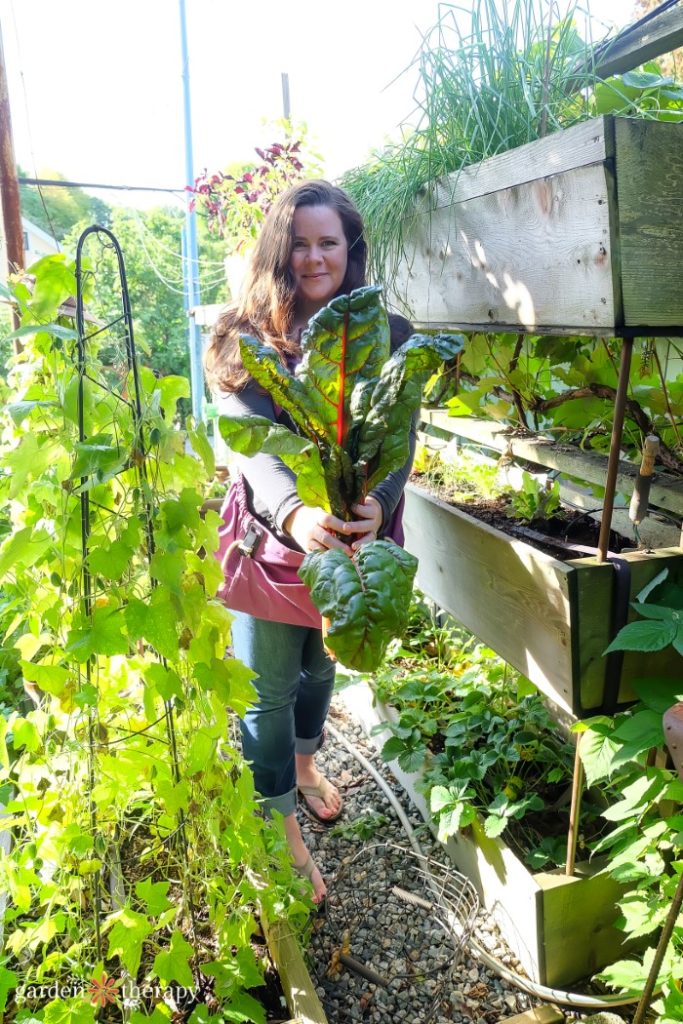 Each box is 12 in wide and 20 in long.  To make installation as easy as possible they were built in 10 ft long sections that were then connected together.

To support the raised garden beds, I have mounted copper supports on the ends of each as well as in the middle where the two 10-foot long beds are connected. The beds are also bolted to the fence behind, where my neighbour grows a grapevine. All this to say that the vertical garden beds are very sturdy.

How to Care for a Vertical Garden

Let’s talk about how to care for the plants growing in a vertical garden like this one, because there are special considerations if you use this design. There are challenges with sunlight, water, and airflow that I have needed to overcome.

Sunlight Needs for a Vertical Garden 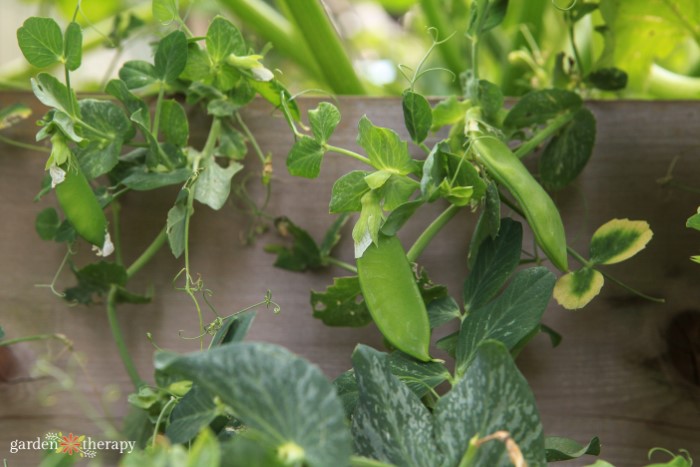 The middle, back of the middle and bottom tiers, however, is a different story. These areas get mostly shade from the box above but also the grapevine that grows on the neighbour’s fence.

So when I’m planning out my garden I’m sure to include my sun lovers in the sunny parts of the beds, and edible flowers, lettuces, and shade-tolerant herbs in the second and bottom level.

Again, this all took some trial and error to get right. I originally planted strawberries on the bottom level because it was a great height for my son to pick berries from when he was young. Sadly, the shaded berries were always bland and small without enough hot summer sun, so they had to be relocated. Now they are thriving once again! 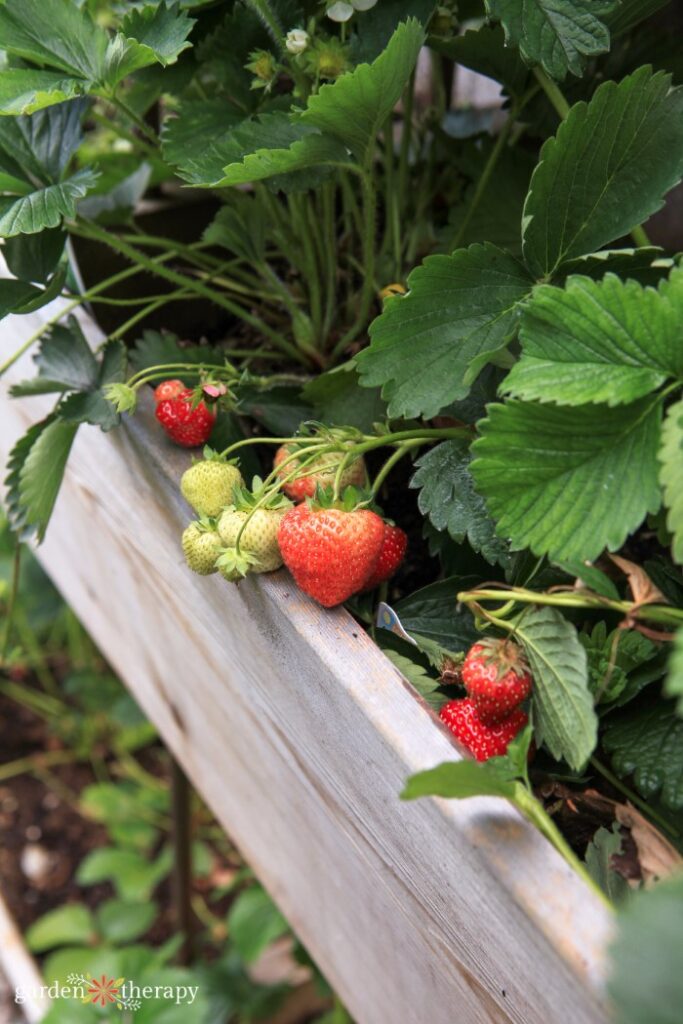 How to Water a Vertical Garden

Watering is also a bit of a challenge with the second two tiers. Obviously they don’t get rainfall, which is something that I count on living in the Pacific Northwest when it rains much of the year.

Truthfully, I don’t do a lot of watering in my garden in general. Much of the gardens are established and drought-tolerant. Of course, vegetables and annuals need a lot of water through the growing season. 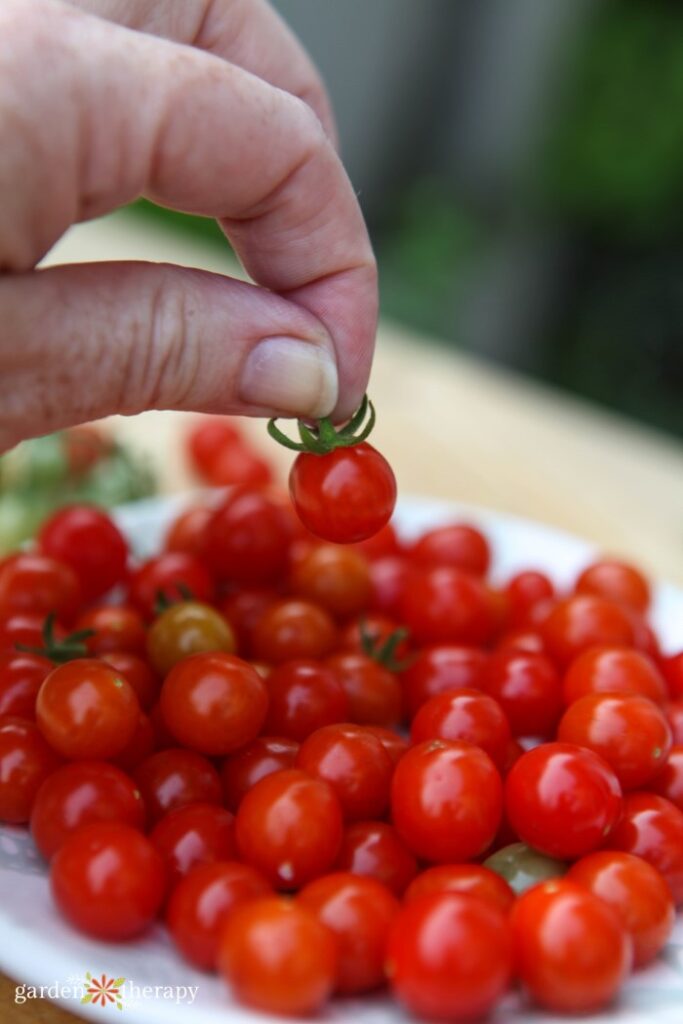 I tend to plan my planting of the vegetable garden so that I’m planting seeds and transplants right before it rains. This way, the spring rains really help to plump up and settle in the new plants.

Since the second and third rows don’t get any of that rain. I have to care for those differently. If there’s enough rain, the second bed will get a little bit of overflow drip from the top raised garden bed. When there’s a downpour, some of that overflow will even drip down from that second bed into the third. However, in general, I need to have supplemental water all year round for the second and third rows if I want to grow anything in the rainy season.

I set up two different watering systems to support the beds.

The first was a solar-powered drip system attached to a rain barrel. This is a great system because when the weather is sunny and hot it triggers the watering system to go on automatically with water collected in the rain barrels. The sunnier it is, the more it waters the garden. Pretty smart!

The only issue with this system was that it broke down after just a year. As it was quite expensive, it wasn’t something that I wanted to keep repairing and working on every year. Instead, I’ve run soaker hoses through the beds and just turn on the drip system.

I use timers in the summer so that they can go on automatically when they really need that extra water. 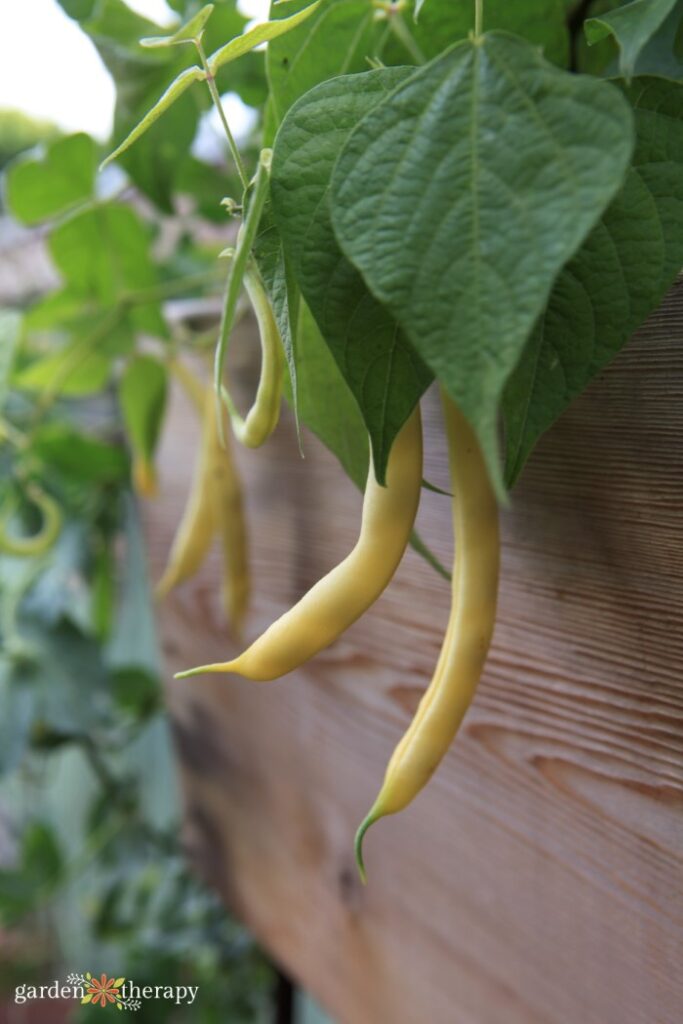 This raised bed design was meant to be open enough so that there are 18 inches above the top of the soil for the plants to grow before they would hit the top of the next bed. This gives lots of room for small shorter plants such as violas and pansies, as well as edible flowers, baby lettuces, radishes, and low-growing greens.

However, you can never plan for (or control) what happens on the other side of your fence. My neighbour has some moss-covered windows blocking the garden beds. In theory, I think this is to keep our cat out of her garden, but sadly all it does is restrict the airflow to the bottom bed. So far everything has grown okay, but it’s certainly something to consider. 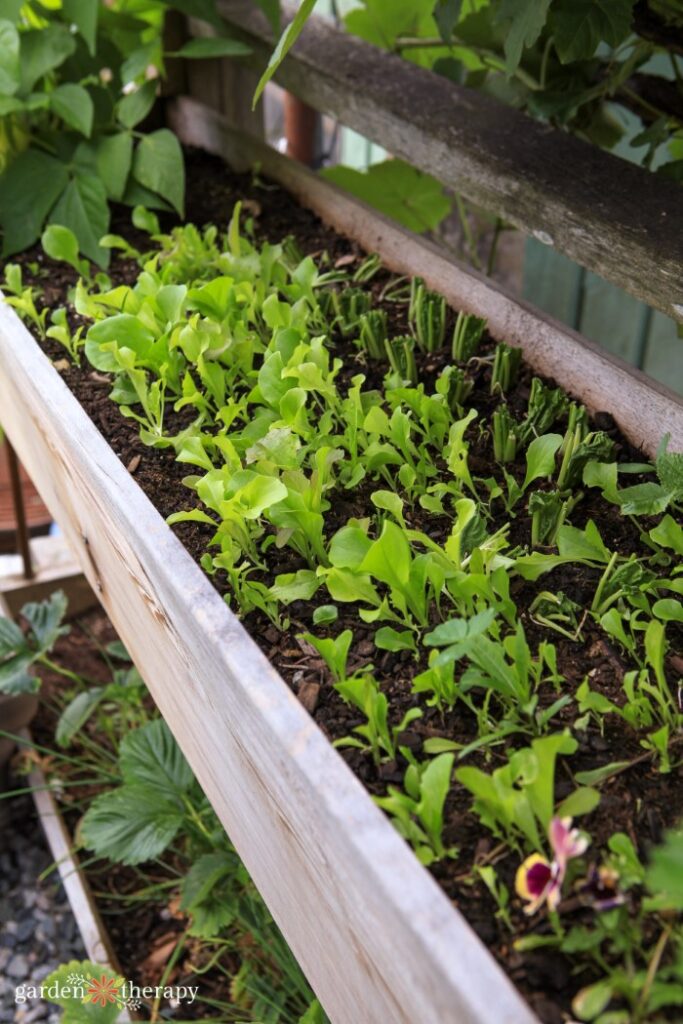 What to Plant in a Stacked Vertical Garden

Harvesting food from this garden is so simple and fun! It’s easy on my back, for starters. I often get asked how I reach the upper beds, and the answer to that is simple. I climb up onto the bottom beds and can easily reach the plants at the top to harvest the food. 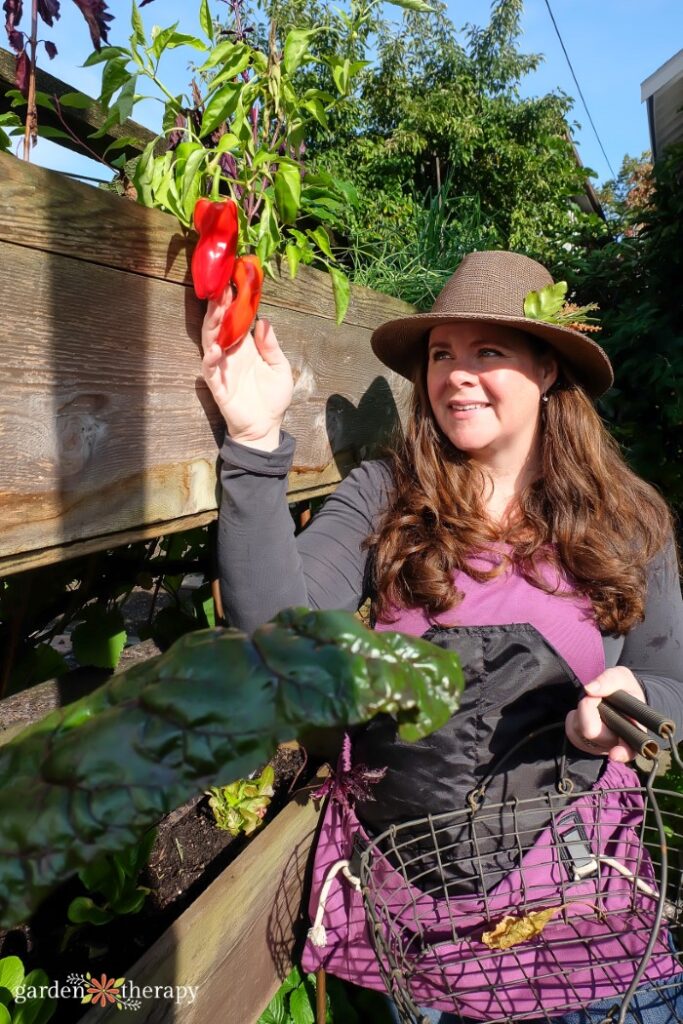 In the upper beds, I usually plant decorative and short growing peppers, along with tumbling tomatoes, or smaller sized tomatoes. I also put other sun-lovers up there like eggplant and garlic.

Because the beds are raised up, I don’t trellis peas and beans up. Instead, I let them grow down. I can then easily pick them from the garden below! This is one of my favourite ways to plant trellising veggies. You can do the same method in hanging baskets too. 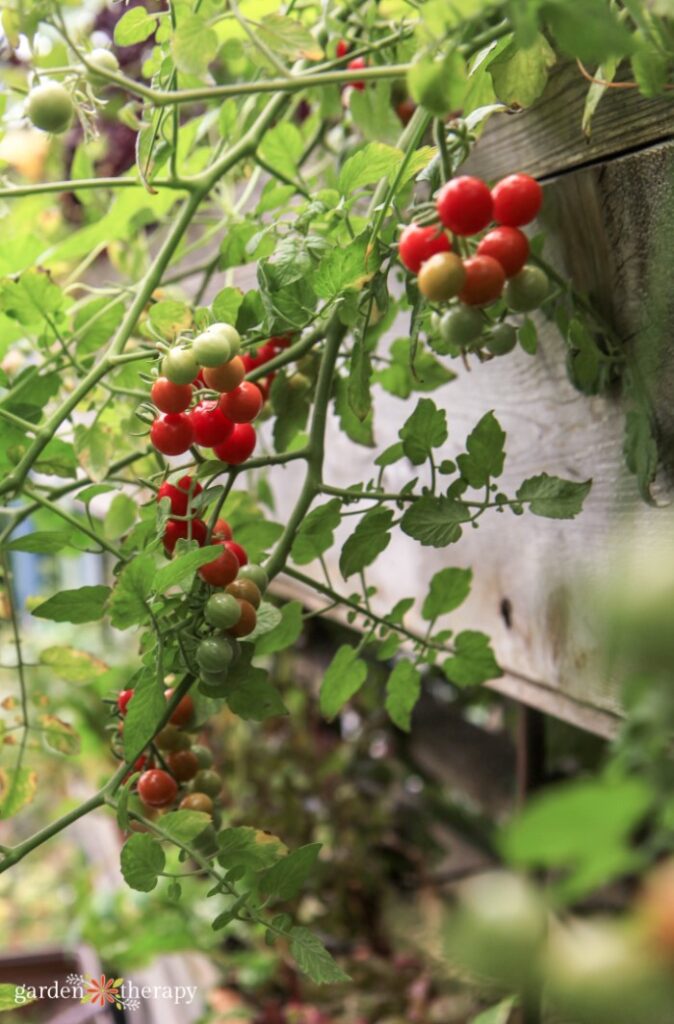 My favourite vegetables to grow in the garden are: 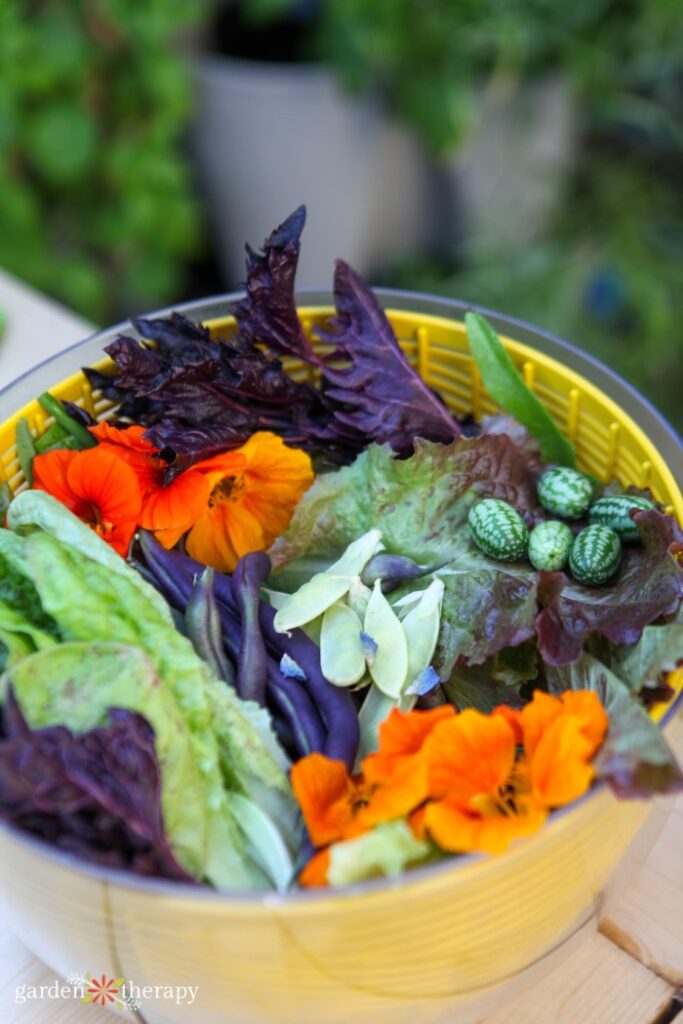 I get a great harvest by planting all of these in the raised garden beds. This organic, homegrown food will feed us for most of the summer months. 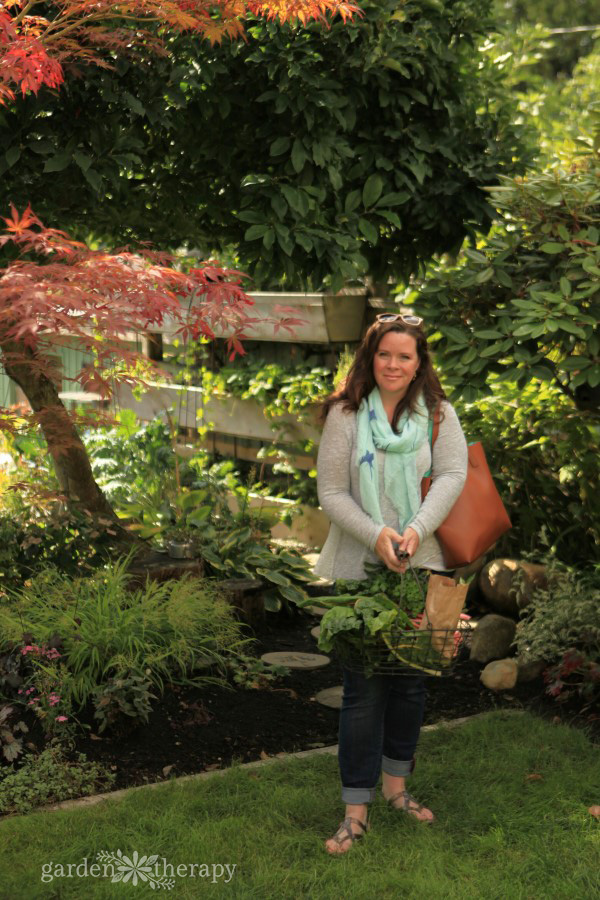 The vegetable garden is always a show stopper when my garden is part of garden tours or when friends come over to visit. My friend Tara Nolan who wrote the best-selling book Raised Bed Revolution, got particularly excited when she saw it. She even took photos of it to share on her social media.

Truly, despite all the challenges and effort to set up, I love this space. I hope you did as well!